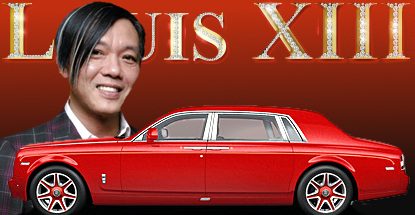 Would-be Macau boutique casino operator Louis XIII Holdings Ltd. is earning loads of free publicity after placing a $20m order for 30 Rolls-Royce Phantoms to ferry the venue’s VIP gamblers from Point A to Point A+. Rolls-Royce Motor Cars said the deal marked “the world’s single largest order” of its cars, two of which will be “the most expensive Rolls-Royce Phantoms ever commissioned,” featuring lots of gold-plated “accents” both inside and out.

The order was placed by Stephen Hung (pictured), a Hong Kong investment banking and real estate tycoon who believes the Phantoms will complement a casino-hotel in which guests will be required to weigh their wallets before being allowed to check in. Well, not really, but the ritziest room at Hung’s still-in-development hotel will set you back $130k per night. If you dare to shop at Louis XIII’s retail shops, be forewarned that it’s by invitation only and the cheapest piece of bling on offer will cost $1m.

Hung’s decision to proceed with the Phantoms purchase is all the more impressive given the recent decline in Macau’s VIP gambling market. But with Louis XIII not scheduled to open until 2016, Hung figures he can wait out the current reluctance of China’s high-rollers to attract attention by making too frequent visits to Macau. Last December, Hung told the Wall Street Journal that Macau casinos were “like a new toy” for Chinese gamblers, who over time would “do gambling in a more normalized fashion.”

While Hung has played an indirect role in the development of other Macau casino projects, he has yet to indicate which of Macau’s six casino concessionaires will allow him to operate under their gaming license. It’s not even clear that the local government is fully on board with Hung’s plans. In June, Macau Secretary for Economy and Finance Francis Tam Pak Yuen told legislators the government had its hands full overseeing the new raft of casinos set to open on Cotai in the next few years, meaning there would be “a seven- to eight-year period without new casino properties.”

WHAT’S IN A NAME?
The gaming license issue isn’t the only unknown hanging over Hung’s project. In February 2013, shortly before Paul Y. Engineering Group officially changed its name to Louis XIII, French purveyors of pricey booze Rémy Martin applied to extend their Louis XIII trademark protection into the Casino and Hotel categories.

Sources have told CalvinAyre.com that the makers of Louis XIII de Rémy Martin have no current plans to develop either a casino or hotel, suggesting the application was intended purely to compel other developers to market themselves under a different name. Either that, or Rémy Martin hopes Hung will buy them to avoid having to change his hotel signage, which probably spells out Louis XIII in diamonds or gold-plated unicorn eyes or something.

Rémy Martin has a history of defending its trademark against gambling interests. Late last year, the booze merchants took action against a German cyber-squatter they felt had unfairly registered the online domain casinolouisxiii.com in November 2013. Interestingly, the squatter told the World Intellectual Property Organization (WIPO) Arbitration and Mediation Center he was “working towards a resolution” of the situation by talking with Louis XIII Holdings, prompting Rémy Martin to point out that the Macau company wasn’t even a party to the dispute. At least, not yet…

UPDATE: Emedia Development Ltd. director John Pepin – the respondent in the domain dispute with Remy Martin – has informed CalvinAyre.com that the casinolouisxiii.com domain was registered in May 2013 rather than November 2013. Pepin also takes issue with the term ‘cybersquatter’ although CalvinAyre.com was merely repeating the term used by Remy Martin in its WIPO complaint.

Pepin also said the timing of Remy Martin’s registration of the Louis XIII trademark in the Casino and Hotel categories suggested “one could be forgiven for questioning” whether Remy Martin had acted “in bad faith to deliberately interrupt Macau Holding Co’s [Louis XIII Holdings?] plans.”

‘Bad faith’ was the conclusion of the WIPO panel in determining the respondent’s actions in registering the disputed domain. Citing six previous instances in which Emedia/Pepin was required to surrender domains it had registered, the panel “believes that bad faith registration has been proven” and ordered the transfer of all three disputed domains to Remy Martin. (Read the panel decision here.)

Pepin told CalvinAyre.com that Emedia “has issued legal proceedings in the German Courts to which Remy Martin are defendants and is hopeful to retain ownership of the domain names.” Indeed, Emedia has filed papers with the District Court of Stuttgart to block the transfer of the casinolouisxiii.com domain to Remy Martin.

This led Uniform Domain Name Dispute Resolution Policy (UDRP) panelist Ian Barker to agree to the termination of Remy Martin’s complaint while the German court case was ongoing, despite Barker’s observation that Pepin’s emails with the UDRP panel had contained “gratuitous offensive remarks implying that the panel” was biased against Pepin. Barker said the panel “will not dignify Mr. Pepin’s comments by repeating them.”