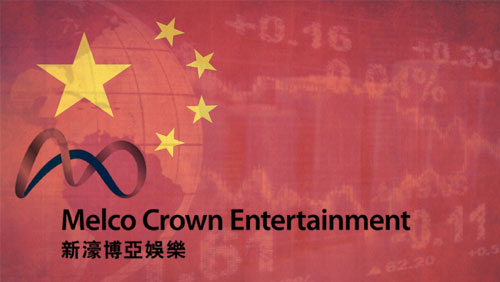 Well, four months have passed since my last word on Melco Crown and we are in the same situation as before. Melco is a great company, run very wisely and efficiently with very nice growth numbers but it is surrounded on all sides by an economy that could topple over at any time.

On almost every front, Melco’s management seems to know what it’s doing. First, regarding debt, its total indebtedness of $2.74 billion is high in an absolute sense, but relative to market cap is only 18%. Even better, 79% of that $2.74 billion is protected against rising rates, up from 72% the year before. Better still, most of that debt is denominated in US dollars, a currency destined to fall as the Russia/China axis of de-dollarization moves apace and the dollar’s reserve currency status continues to erode.

Not only is Melco growing but it is growing in the exact right areas. Total market-wide gross gaming revenues for 1H 2014 increased 12.6% compared to 1H 2013 to a record $24.1 billion, with the mass market table games segment scoring the highest growth rate of 35.6% year over year. With capital controls clamping down on the VIP segment, it is the mass market segment that needs to pick up the slack, and that is what is happening.

Even so, the VIP junket-promoted segment of Melco’s market still accounts for 44.7% of its total revenue base. While that’s down from 51.3% in 1H 2013 and that’s good, the VIP’s are still a major part of its business and they will continue to be under attack by the Mainland Chinese government through anti-corruption laws and money laundering regulations. The most worrying number is that five of Melco’s largest customers account for a dizzying 22% of its revenues. Count’em on one hand! Talk about top heavy.

Aside from the direct toll these government-spawned follies have on Melco’s business, not to mention necessitating the hiring of shady junkets to skirt capital restrictions, the indirect toll is and will be much more severe. According to the Wall Street Journal, a whopping 47% of super rich Chinese (defined as a net worth of $1.5 billion or more) are planning to move out, mostly to North America, within the next five years. Once they do that, they ain’t coming to Macau no more, certainly not on any regular basis. Can you imagine what would happen if Melco’s top five VIP customers move to North America in one shot? Revenue plummets 22% overnight. We’re talking about five single human beings here. That’s it.

As for the mass market, yes Melco’s mass-market segment is growing nicely now, but if we dare ask ourselves the question of how many Chinese mass market people do 47% of the superrich employ, enabling the small fries to have a nice outing in Macau, then we should start worrying. When the exodus of the super rich gets serious, forget about the direct consequences to the VIP market, what happens to the Chinese middle class?

And this doesn’t even begin to take into account the monetary environment and its impact on the now declining manipulated Chinese boom. The headlines are starting to look grim. After the real estate plunge, the rest of the economy is now following. Just from this week:

We’re just getting started. Things will get worse before they get better. Why? Because in order to sustain the boom, the People’s Bank of China needs to keep the same pace of money growth it did in order to get the boom started. Otherwise the boom turns bust. But printing that amount of money will lead to massive price inflation, so the boom cannot be maintained without the middle class and the poor being robbed in order to support it.

And now, even in the US the money flow is drying up. Below is a 20-week look at the 1-week M2 average, the most precise gauge of the money supply in the US, compiled from these tables. As you can see, for 20 weeks it has gone nowhere, rising only half a percent in close to half a year.

Immediately preceding the crash on September 2008, we had a similar situation of the 1-week M2 average staying stagnant for 25 weeks. Such a lengthy period of monetary stagnation is very rare, and we are now 5 weeks away from that situation. Though the US monetary situation is separate from the Chinese one, if in five weeks the one-week M2 average does not start to pull away, we will be in the same situation monetarily as we were in September 2008, at least in the US markets, and that will surely bring down China’s capital markets in a contagion short term.

(For more on why the 1-week average is important and how to use it, see here.)

There is a big economic reset coming in the Far East and it is already beginning. As good a company as Melco Crown is, its stock price will not escape the surrounding environment. Its bottom line may not even suffer that much compared with the competition, but during economic resets that is secondary to beta volatility. Once the reset is over, Melco will be among the survivors, stock price beaten but company alive. It is then that its superb management will really shine.

No one can say exactly when that will be but keep following here for updates.