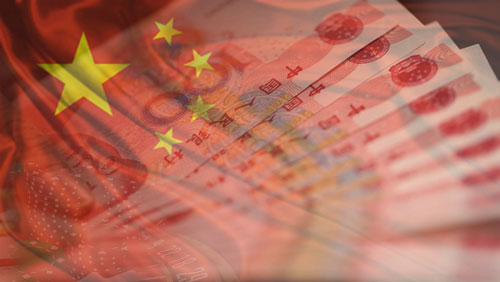 Last week, I covered the deteriorating Chinese housing market situation coupled with the mild crackdowns, by way of capital controls in Macau as evidence for calling a top. This week shows continued evidence of a more serious crackdown on Macau by Beijing officials on VIP players at the Baccarat tables. As the economy continues to deteriorate in China, these types of crackdowns will become more widespread and severe, which will in turn further worsen the economic situation. State apparatuses do this sort of thing during times of economic turmoil in an attempt to solidify power while people are in distress and looking for relief.

The official excuse is a fight against corruption but that corruption is rarely specified, much like President Xi Jinping’s newly launched investigation of Zhou Yongkang, China’s former domestic security chief. Charges against him are not publicly stated. It’s all part of the same government power grab.

According to the Wall Street Journal last week, the current fight against corruption is falling squarely on the shoulders of VIP gamblers. Revenue from VIP’s fell up to 18 percent in July. More evidence of a subdued superrich class is a huge 40 percent plunge in luxury goods sales in Hong Kong in April. The full graphic from WSJ is below. In going after top politicians and the superrich, Jinping is trying for a double whammy of preemptively subduing his rivals while going after the cash. China’s superrich accounted for 2/3rd of Macau’s $45 billion gambling revenue last year after all. 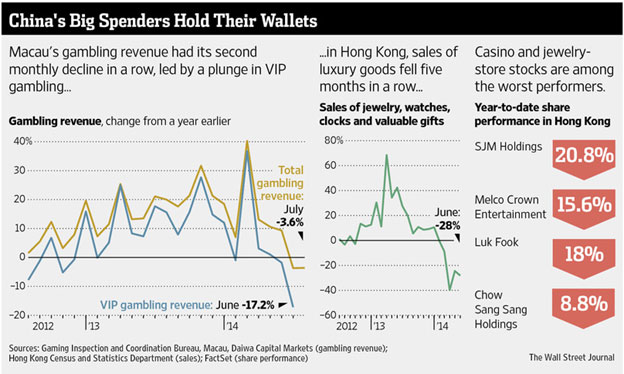 But back to “corruption” for a second. Most corruption, as defined by government, has to do with tax evasion, which is just a person’s attempt to keep his own money. Much of it also has to do with illegal drug revenues, which are only illegal by fiat, and are otherwise victim-less crimes. While money laundering no doubt occurs through the Macau scene among the VIP players, it is more likely than not that in fighting what it calls corruption, Beijing is fighting crimes against its own power rather than legitimate crimes against other people, like murder and theft.

The quick decline of VIP revenue should come as no surprise given the structure of the VIP market in Macau. The whole thing is jerrybuilt and extremely unstable. It is similar to the structure of Japan’s Pachinko market, held together with a weird loophole in gambling laws. While Japan gets around its gambling laws via a relatively more stable loophole in allowing gamers to cash in through independently owned Tokyo Union Circulations across the street from the actual Pachinko parlors, China’s junket scene is inherently and wildly unstable, really held together with spit, lending itself to serious (real) crime and state interference.

While a Macanese junket operator does typically perform the legitimate function of catering to the swanky needs of superrich VIP’s (everything including those little paper margarita umbrellas), that is not the main reason for their existence. The main reason for the existence of a junket operator is not as a swanky butler, but as a financial middleman performing a function a lot more shady. Beijing places strict limits on the amount of capital that can be taken from the mainland at any given time, restrictions that are being more strictly enforced as time goes by. This forces the superrich to employ the services of a junket, because that way a VIP gambler can take loads of cash from a junket operator who has capital already in Macau, and pay him back later when they both return to China. That way, capital does not technically cross the border from China to Macau.

This presents one huge and dangerous problem. Since the whole process is very dark grey, and since Beijing does not recognize gambling debts incurred by skirting its own capital controls, junket operators cannot exactly defer to the courts in order to settle gambling debts. Things therefore can get very nasty if a conflict ensues. I would venture to guess that this nastiness, caused by Beijing in the first place by necessitating the use of junkets due to arbitrary capital controls, is the very selfsame “corruption” that the government is cracking down on in the first place.

Essentially, the very structure of the VIP market in Macau, which is fundamentally built on the foundations of skirting capital controls, lends itself to government antagonism. It was inevitable that, come worsening times, the VIP’s would be targeted first, and indeed they have been and are. Do not count on China to suddenly loosen capital flight restrictions. They will only get worse as the economic situation darkens, which paradoxically will serve to worsen the economic situation.

In an attempt to combat the trend, Macau casino operators are now actively trying to cater towards mainstream gamblers to compensate. Sands Macau, for one, is cutting the amount of VIP tables by 28 percent. But catering to the mainstream in place of the VIP’s, while it is admittedly the only option available to Macau casinos at present, will not help to avert the slide, only mitigate it slightly.


The bottom line is that the only way Macau will turn up from here is if Beijing suddenly and inexplicably ends its capital control regime from the mainland to Macau. That would end the need for junkets as financial middlemen and reduce their influence to that of simple high-end concierges, enabling casinos to pocket the difference. It would also bring back all the lost VIP revenues and then some. But in order for that to happen, Beijing would have to be OK with loosening its power grip.

In other words, it ain’t gonna happen.