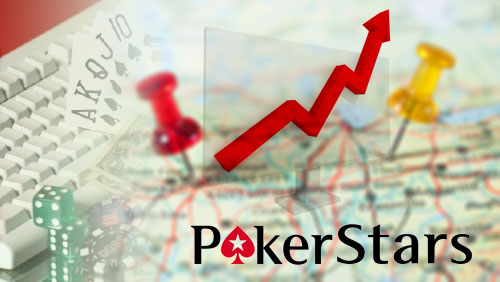 The focus on prime time poker news continues to be New Jersey, after Gov. Chris Christie dropped his biggest hint yet that the Garden State may be willing to enter into interstate compacts, designed to increase online poker liquidity.

Howard Stutz of the Las Vegas Review-Journal claimed that Christie had told the news outlet that “he had spoke with Nevada Governor Brian Sandoval about the two states possibly combining Internet gaming structure through an interstate compact.”

The change of heart comes after protesters took to the street holding signs begging the Governor “not to turn Atlantic City into a ghost town” after the announcement of the closures of Trump Plaza & Taj Mahal followed the actual closures of the Atlantic Club and Revel.

PokerStars Return to US Cyber Soil is Weeks Away

Are PokerStars going to be the Boardwalk’s salvation?

According to the Twitter account of State Senator Ray Lesniak, the dynamic duo of PokerStars and Full Tilt will return to US shores within ‘weeks, not months.’

Lesniak believes the two brands owners will invest millions in their online, and brick and mortar infrastructure, creating much needed jobs, after approx. 8,000 people have been cast into the job queue since the closure of the Atlantic Club in January.

With legal sports betting getting the green light, and a return for the ‘bad actors,’ it seems the people who are paid a decent wage to keep the planks of the Boardwalk firmly nailed down, are playing the anything-is-acceptable card.

PokerStars Apply for US Trademarks

What we do know is a return to US soil is a case of ‘when’ and not ‘if’ and that’s great news for anyone involved in the poker biz.

PokerStars are working feverishly behind the scenes to make sure that they are ready to set sail when the wind is right, and part of this work involves applying for trademarks and logos that Stars use all over the world.

It’s believed that it’s the first time PokerStars have applied for trademarks in the US for seven years. We Are Poker, Zoom Poker, The World Cup of Poker, and the PokerStars red spade logo are just a few of the trademarks and slogans that Rational Intellectual Holdings Limited wish to protect.

When Full Tilt does return to the US, one wonders if the Great Dane, Gus Hansen, will still be one of the driving forces behind brand recognition?

The face of Full Tilt Poker has this week lost another $751,486, to take his high stakes cash game losses to a career high of +$20 million. He is down $5.5 million this year alone, and one wonders when Hansen will eventually run out of money!

The losses have not stopped the FTP marketing machine from moving forward to its not anticipated at all heads-up showdown between Hansen and the other Full Tilt Poker Professional Viktor Blom.

In a CalvinAyre poll, 62.5% stated that they couldn’t give two shoots who won the best of three mixed games contest.

So where does Gus Hansen find $20m to lose in online cash games?

Perhaps, the Great Dane is a huge winner in an underground cash game that we are not privy too?

If you want to find out for sure then ask Phil Laak or Antonio Esfandiari. The friends, and poker celebrities, saw their pilot show “Underground Poker” premier on the Discovery Channel this week, and are hoping for enough viewers to lead to extra episodes being filmed.

In the pilot episode, Laak and Esfandiari went in search of an underground cash game in New Orleans, although one would have imagined, for a pilot, that it would have been more sensible to somehow get invited to Dan Bilzerian’s home game.

One person who has more than his fair share of national TV airtime is the former New Jersey Devils star Ken Daneyko, and that’s set to continue after he signed with partypoker to help promote the brand throughout New Jersey.

Daneyko has played more than 1,283 times for the Devils – a club record – and he will be hoping to continue a good run of recent form that has seen him win a side event at the Borgata Spring Poker Open, and also cash in the WPT500 held at the Aria this Summer.

Daneyko will make his online debut in the partypoker Garden State Super Series (GSSS), and will also feature in the World Poker Tour Borgata Poker Open.

With more and more ‘poker’ focus being made in the US, the European Main Events are becoming a very sparse thing indeed for the World Poker Tour.

The recent Main Event held at the Merit Crystal Cove Casino, in Northern Cyprus, is only one of two European events currently occupying space in the Season XIII schedule.

The contentious re-entry clause made sure that the 404 entrants was a WPT record for a Cypriot Main Event, and the winner was the WPT National Merit Cyprus winner – Alexander Lakhov.