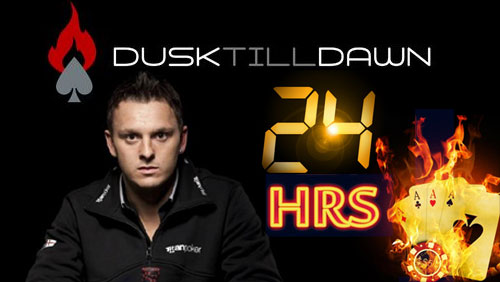 Sam Trickett talks to Lee Davy about the recent 24hr cash game at Dusk till Dawn in Nottingham, his affiliation with the club, his respect for Rob Yong and much more.

It was a big weekend for Dusk till Dawn (DTD), as they turned their attention to cash game customers by running 24hr cash games from Fri 29th Aug through to Mon 1st Sep.

One young man who got involved in the action was Sam Trickett, and I sat down with him to talk about his experience, how proud he is to be part of the bricks and mortar, his respect for Rob Yong and much more.

How long did you play for?

I got there about 8pm on the Friday and played until 1pm on Saturday. I lost a £15k pot straight off the bat, and then a £10k pot not long after, so I was stuck around £13k before I had even ordered a cup of tea. I was never in the green once throughout the entire session, so as strange as it sounds, I was actually happy when I ended the session just £2k down.

Do you like playing in these endurance based cash games?

It depends who I am playing with to be honest.

I have been playing in some cash games in London recently and I have found them really boring. The games are full of pros, all playing really tight, and so there is a lack of both action and atmosphere.

The games at DTD are in stark contrast. The games are highly sociable. People like to have a few drinks, relax and get involved in the action.

I love playing in games like that, and when I do, I enjoy myself whether I win or lose.

The VIP Room is called the ‘Sam Trickett Room;’ how did that happen?

Rob {Yong} told me his plans to name the VIP room after me, and asked my permission – obviously, it was a no brainer for me. DTD had a prominent effect on my early poker career, and Rob helped me out a lot during those days.

I was honored and extremely proud that he would ask me.

What is it about the place that you love so much?

It’s just so friendly. I have played in a lot of casinos up and down the country and none of them have the same type of friendly atmosphere as DTD.

The people who I play with are always happy when I do well. There is none of this ‘Oh there’s Trickett getting lucky again.’ No bitchiness or jealousy, just a want for me to do well, and I appreciate that. A lot of these people would be friends of mine away from the tables.

Well I have no idea where the money is going then because I thought I was the worse player in the game!

When I first started playing in there – with my name on the room and all that – I was hoping to start off well. It’s been the total opposite. The games are some of the best that I have ever been involved in, but I must be the biggest loser in the game.

First and foremost he is a nice person.

You wouldn’t think he is worth what he is, and that he owns the club, because he is so down to earth. He is also a central figure in the UK poker scene and is doing so much work to promote the game at the grass roots level.

The numbers he attracts to his club is incredible. I have seen people travel all the way from Torquay to play in a £15 freeze out such is the aura of this guy.

Tell me one of your DTD cash game stories.

I remember playing in a game with the Devilfish once. It was a time where we played 24-hrs straight and he was short stacking and reloading. Now you know that Devilfish is renowned for his reactions to bad beats right, well on this occasion, I have never seen someone be on the end of so many bad beats in my life.

He would get it in with top set and be outdrawn, he would flop a huge draw, get it in, and miss. He must have lost about 25 huge pots in a row. All the time he’s complaining and sinking further in his chair, and everyone else compounds his misery by bursting out laughing. You know the type of laughter I’m talking about. The type where you are trying really hard not to laugh and it just shoots out of your mouth.

I am sure he aged a decade after that session.

Funny as fuck though.

Any other legends playing in the game?

I play in a Friday night game and it’s only Devilfish and myself who are pros, so to speak. This is why it’s such a great game.

Royston Drenthe popped in for a game the other night, which was quite random. He used to play football for Real Madrid but plays for Sheffield Wednesday now.

Paul Newey also played in the 24hr cash game. It was the first time he had been in DTD and he was really impressed. He won a bit as well so that helps. He’s moved to Jersey now so I doubt we will see too much of him, but he said he will be back when he’s in the area.

Paul loves his poker and is another great guy. Did you know that his first-ever live tournament was the $1m buy-in BIG ONE for ONE DROP back in 2012?

Now that’s what you call having passion for a game.