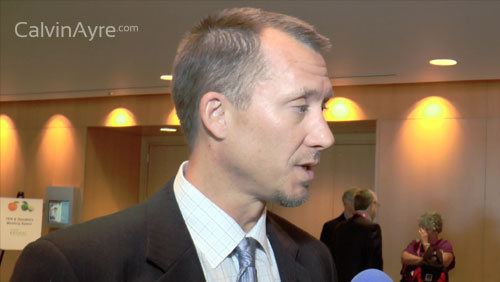 Becky Liggero talks to Nevada Gaming Control Board Chairman A.G. Burnett as he gives an update on what has been going on in Nevada from an online poker perspective over the past year.

Becky Liggero: I am here with A.G. Burnett of Nevada Gaming Control Board. I met with you last year and let’s start with an update on what’s been going on in Nevada from an online poker perspective over the past year?

A.G. Burnett: We recently signed the Multi-State Agreement with Delaware, which is the first state to join with us in an attempt to do legal interstate online gaming. We have been working very with the Delaware regulators who were just great to work with. We’ve got a fantastic relationship with them, which adding New Jersey as well and right now the work is being done is to immigrate the platform between the two state so they can share liquidity amongst themselves. And really what’s being developed right now is the platform hopefully that would be used as a model for other states as they come online if that’s the country chooses to go. It’s a lot of work though. You don’t just flick a switch to get it on. It’s a ton of work being done both by the regulated licensees and the regulators together in closed doors sessions hashing out everything from what the code would look like to what types of protection is need to be in place. How player protection is gonna work; geolocation is gonna be shared between the two states to ensure that everything stays legal and valid between the two states. It’s a swarm of activity right now.

Becky Liggero: When do you think we will actually see some movement between Nevada and Delaware?

A.G. Burnett: There has been some movement. I don’t know if the public will see the movement. I know that I am seeing a lot of movement. I know that my colleague in Delaware Vernon Kirk (Delaware Lottery director) is seeing a lot of movement as well and so are 888 who is the shared licensee between the two states. They are the one who is really moving fast. And they’re getting the code written to do the platform. There’s gonna be a clearing house is developed that’s gonna able all cash payments to work and payment processing to occur. I imagine that sometimes later this year, things will start to get up and running, which will be the result of a lot of work.

A.G. Burnett: We’re doing a couple of things and I think there is a need for a couple of points to be made first. I know there’s a lot people say  that they’re surprised about the numbers. We’re not surprised at all. We knew the state has certain amount of people within the state but the interesting thing I think there will be born out later is that yes, there are 2.5 million residents in the state of Nevada but that’s not the pool from which people can register for the website in Nevada. When online gaming was first legalized, the licenses were granted and websites were up and running, the registrants for the licensees spend the entire club. That was part of the goal in having poker only which was to bring people in Las Vegas. And so as the next fiscal year comes out and plays out, we will see more people visiting Las Vegas who are not necessary residents of Nevada, who are registered and will play. And I also think that we will see some positive figures as result of the tournaments, the land-based tournaments that is occurring. We’ve also licensed an operator to have a clearing house and in our operator poker network which will share liquidity between two land-based operators in Nevada—Caesars Interactive and Treasure Island. I think that will start to gain some interactions and you may have other licensee or applicants to come through to do that. The wheel is spinning that’s for sure. They’re really are spinning and none of it is a surprise to us. This is all how we anticipated playing out. However it’s not a short game; it’s a long game and we have to take the long view and take the long approach to success at the end of the day.

Becky Liggero: Fantastic on that note. Best of luck. Thank you very much.