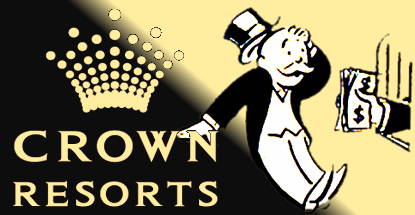 Australian casino operator Crown Resorts has been accused of operating a ‘secret bank’ for its domestic VIP gamblers. The Sunday Age claims that Crown has been extending wagering credit to Aussie high-rollers in violation of the Casino Control Act 1991, which allows credit to be offered to international VIPs but requires local gamblers to pay for their chips in advance. A Crown spokesman has called the allegations “wrong and baseless.”

The Age quoted a Melbourne-based VIP with a history of wagering at Crown Melbourne’s Mahogany room saying there was “a system worked out where you get approved in advance, sign this form when you get there and they hand over the chips.” Should the gambler have a lucky night, the credit is paid out of his winnings. But if the gambler loses, they’re given one week to make things right. “Don’t pay and [Crown] send professional debt collectors after you.”

Crown’s system relies on tax rules that give it the ability to accept checks that the casino isn’t required to deposit for days, plus the ability to issue “chip purchase vouchers” which act as promissory notes. Crown claims that the Act allows it “to offer a check cashing facility to any player who establishes a deposit account” and “the provision of chips to the player to the value of the amount credited to their deposit account.”

Crown also relies on ill-defined rules that allow credit to be offered to gamblers “not ordinarily resident in Australia.” Gaming regulators in Victoria admit there is no conclusive definition of this term, which Crown has interpreted to include permanent residents that meet certain undisclosed criteria.

Such was the case of Zhao Li, one of several deadbeat VIPs Crown is suing for non-payment of millions of dollars of wagering credit. In 2010, Zhao paid $2.3m to acquire a mansion in a Melbourne suburb, something the Foreign Investment Review Board doesn’t authorize for “foreign non-residents or short-term visa holders.” Regardless, Crown disputes the suggestion that “owning property in Australia means that a person must be an Australian resident.”

Over the past four years, Crown’s fleet of private jets has made 439 flights to ferry VIPs to its Melbourne property. Flights from domestic cities like Sydney and Perth accounted for 175 of these trips. The Age’s allegations are all the more ill-timed given this week’s announcement that the state government had granted Crown Melbourne numerous concessions, including a 17-year extension of its license and significant expansions of its allotment of gaming tables and pokies machines.