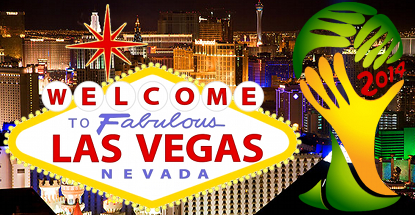 Nevada casinos enjoyed a 14.4% boost in gaming revenue in June thanks to a hefty increase in baccarat win and the best performance to date by the state’s regulated online poker sites. Revenue at state casinos hit $906.9m, while casinos on the Las Vegas Strip – where most of the VIP baccarat action goes down – enjoyed a 22.5% revenue rise to $532m. Statewide slots also saw increased action, with revenue rising nearly 8% to $562m as handle rose 4% to $3.2b.

Overall poker revenue fell 4.7% to $15.2m but Nevada’s three regulated online poker sites earned $1.037m, up $175k from May’s total, marking the first seven-digit revenue tally since the state launched its first poker site in April 2013. The increase show the benefits of Vegas hosting the World Series of Poker, with all those poker players who busted out of events early having online options for at least attempting to make their money back.

Despite the 2014 FIFA World Cup kicking off in June, Nevada sportsbooks saw revenue tumble nearly 45% to $7.1m. While ‘other’ sports showed a 116% revenue bump to $5.9m – higher than the $4m ‘other’ earned in June 2010 during the last World Cup – laggard football and basketball bettors cashing in winning slips accounted for a combined net loss of $3.4m. Even baseball let Nevada down, with revenue falling 34% to $4.5m. Nevada’s racebooks reported a modest 5% revenue increase to $4.5m.