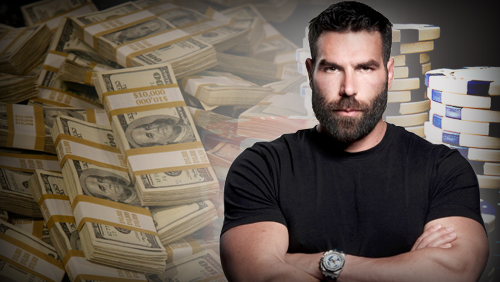 Dan Bilzerian gives one of the funniest interviews of the year after appearing on the Howard Stern show where he talked about poker, girls, guns and lots more.

Would you class Dan Bilzerian as a poker player?

I doubt you are ever going to see him grace the Global Poker Index (GPI) Top 300, and even I have more Hendon Mob flags, but according to Bilzerian that hasn’t stopped him winning $50m in poker games this year.

Where did the money come from?

The man with the big guns told Stern that he won the money off Billionaire corporate types that he likes to invite to his house to play in private games. The infamous ‘Molly’s Game’ is no place for this man mountain of sexiness, because he said the likes of Tobey Maguire are a bunch of pussies.

It hasn’t been all sunshine for Bilzerian though. He lost $3.6m playing poker on three separate occasions, and advises people never to play poker professionally because the lows cause more damage than any high that you experience.

Despite winning $50m Bilzerian told Stern that gambling makes him miserable when he loses, and he couldn’t give a shit when he wins. He also said that gambling destroys your value of money, whereas I would have thought the hookers, cars and yachts might have had the same effect?

The man who keeps an arsenal that Tony Montana would be proud of told Stern that he received his first gun when he was six years old, and once served three years in prison after showing off in High School. What did he do? He showed his friends the M-16 he had in the trunk of his car.

Whilst the male poker players might find Bilzerian interesting, one doubts he will be brought into the bosom of the female poker community with open arms.

The man with more women than Hugh Hefner told Stern that the most girls he has ever banged in his life was four, and he once banged 16 girls in 12 days when on a trip to Cannes. He was quick to point out that all 16 of them were Playboy quality, and he had only ever banged one fat girl in his life and ‘that was enough for me.’

Curiously he recently broke up with his girlfriend just a few days ago. Yes, the man with a ready made black mans MTV video entourage, has had a girlfriend throughout all of these exploits. Now that seems insane until he told Stern that she was open to threesomes, allowed him to bang other girls and realized that the shit wasn’t that serious.

But his sexploits have gotten him into some trouble.

After three days of drinking, Bilzerian was prime to have sex with a Stripper and so he approached his friend for a little bit of medical assistance. His friend gave him a 100mg Viagra pill and told him to just take half. Bilzerian decided to take two of them instead. This led to a heart attack. He had another one 24-hrs later. He was 25-years old at the time.

If you want one of the most interested jobs of your life then why not apply for a position at Dan Bilzerian enterprises?

He has a staff of 20 people, including three assistants, three personal chefs and he is currently searching for a ‘pussy coordinator’ because he is finding it difficult how to figure out which hot chick to spend his time banging.

Well the man does have a point.