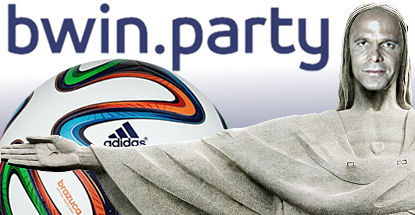 Struggling UK-listed online gambling operator Bwin.party digital entertainment issued a Q2 trading update on Tuesday that indicated revenue was “a little softer than expected,” despite the positive impact of FIFA World Cup betting. The company won’t release detailed info until August 29, but investors are bracing for the worst following Tuesday’s tepid update. Bwin.party shares closed down 1% to 85.3p after trading as low as 84.5p at one point.

Bwin.party CEO Norbert Teufelberger (pictured) said sports betting had been “solid” in the three months ending June 30, which is about the least damning adjective a betting company could use in a World Cup summer. Betting turnover remained below the same period in 2013, reflecting the company’s voluntary withdrawals from a number of ‘grey’ markets and the forced expulsion by those duplicitous license-revoking bastards in Greece, but Teufelberger said increased gross win margins had “mitigated” the turnover decline. Teufelberger also highlighted the company’s “particularly strong” betting performance in Italy and continued growth in mobile wagering.

Bwin.party says sports betting volumes and gross win margins during the World Cup’s July matches had been “strong” and that the overall World Cup results had been “in-line with management’s expectations.” Again, Teufelberger appears to be damning with exceedingly faint praise, here. For what it’s worth, Bwin.party derives around one-quarter of its total business from Germany, whose patriotic punters likely cashed more than a few winners along the way to their team hoisting the Cup, so the final figures will be interesting to say the least.

Bwin.party’s other verticals were far less solid in Q2, with poker suffering from “a challenging backdrop” in which traditional seasonal declines were exacerbated by players dealing with shiny World Cup distractions. The 2013 relaunch of PartyPoker has failed to reverse the brand’s decline and Teufelberger noted that revenue from New Jersey’s regulated market remained “below industry expectations.”

Casino revenue was “impacted” by poker’s decline, but sports betting cross-sell reportedly “helped to minimize” the carnage. Bingo’s performance was “broadly flat” thanks to increased marketing from competitors in the UK and Italy. Mobile and touch now account for 80% of Foxy Bingo’s new player registrations, up from 16% in the same period last year.

With revenue soft, Bwin.party is attempting to stay in the black by trimming expenses to the bone. The company now says its cost-cutting moves will deliver an additional €10m in savings on top of the €20m previously announced. Teufelberger said the company was “in the process of reshaping a number of areas of our business,” details of which will be revealed in that August H1 report. Last month saw Bwin.party denying reports that the company was considering flogging some of its assets in order to realize some quick capital gains.

Teufelberger also tossed off a few management-speak hints that the company was taking steps to “simplify decision-making” and “reduce complexity.” Bwin.party fought a prolonged and very public war with activist investor Jason Ader over the future of the company, management perks and the makeup of the company’s top executive ranks, which resulted in the departure of three board members in May, including Bwin co-founder Manfred Bodner. Could more top executives be updating their resumés?