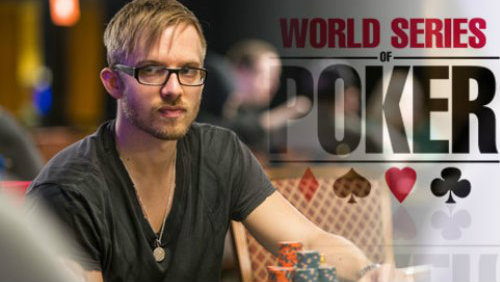 What’s so great about the World Series of Poker (WSOP) Main Event?

Yeah…that’s not too bad either.

It’s the one event that can turn the man who empties your trash into a multi-millionaire. It’s the tournament where Rocky wins. Wimbledon FC wins. Darvin Moon nearly wins.

But this year, it’s different.

It’s the year of the professional and it arrives right on point in the skill versus luck debate that still rages within the hallowed halls of legislation in the land of the red, white and blue.

The chip leader, at the end of Day 6, and by quite some margin, is the Swedish supreme, Martin Jacobson, who is widely recognized as one of the very best poker players on the planet never to win a major title. Perhaps, he has been saving himself for a tournament win worth $10 million?

Jacobson has 22,335,000 chips, and that’s 5.5 million more than Luis Velador, who lies in second place. Talking to PokerNews report Remko Rinkema, during the Day 6 dinner break, Jacobson admitted to feeling the pressure but said that he tries hard to block that from his mind so he can concentrate on his game.

Jacobson is not the only recognizable name left in the final 27, in fact there are tons of them: Dan Smith, Craig McCorkell, Andrey Zaichenko, Bryan Devonshire, Mark Newhouse, Leif Force, Yorane Kerignard and Brian Roberts just a sprinkling of stars all dying to make that final table of nine.