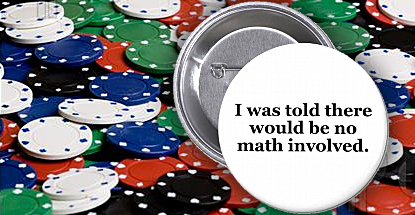 Atlantic City’s year-on-year casino gaming revenue comparisons are increasingly slide-rule worthy. Between the addition of online gambling revenue last November and the imminent closure of up to one-third of AC’s gaming joints, the next few years’ results will come with so many variables that Star Trek’s Scotty would have no problem warning Kirk that his calculator’s dilithium crystals aren’t up to the challenge. But here goes nothing…

The 11 casinos currently plying their trade in AC earned $236m in June, but $9.5m of that is online gambling revenue, putting the total brick-and-mortar casino tally at $226.5m. That’s a 5.7% decrease from the same month last year, but that’s when the Atlantic Club was still a going concern. Taking out the Atlantic Club’s contribution, June’s revenue was down a much more modest 0.3%, and anything under 1% is generally treated as a ‘win’ in AC these days, so, er, yay?

The Trump Plaza, which was put on deathwatch on Friday, brought up the rear with a mere $4.7m (-31.9%). On Monday, the Plaza officially notified its 1,153 workers that they’d be out of a job as of September 16. That will bring AC’s total complement of casinos down to eight, assuming no insane billionaires wander through town and agree to rescue the Plaza, Revel and/or Showboat.

The Plaza’s announcement prompted American Gaming Association (AGA) CEO Geoff Freeman to issue a statement obliquely referring to Atlantic City’s “evolving situation,” which he said should serve as a warning to other US gaming states not to impose “restrictive regulations that fail to keep pace with business demands and increased competition.” Given that New Jersey has been a chief engine of the US push to expand brick-and-mortar casino operations into the online realm and has carried the fight for legal sports betting outside Nevada more or less single-handed, Freeman’s criticism seems a bit off base.

Freeman also wasn’t above linking AC’s woes to what he referred to as the “tax and torture” model of some other US gaming states. For the record, AC’s effective tax rate on casinos is 9.25%, not far off Nevada (7.75%) but a pale shadow of New York (34.9%) or Pennsylvania (55% rate on slot machine revenue and 16% on table games) or Maryland (67% tax on slots and 20% on table games). Pushing for lower tax rates is part of Freeman’s remit, but using AC’s still smoldering corpse as leverage seems more than a little opportunistic.