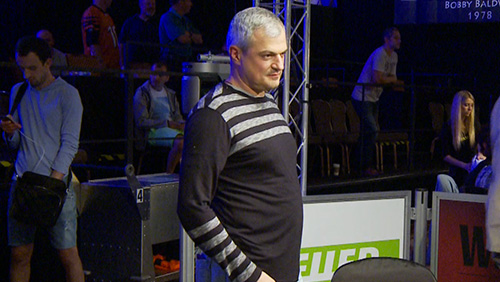 WSOP Day 39 recap sees Igor Dubinskyy taking the penultimate bracelet of the series, and the players come out en force for the second starting flight of the Main Event.

It’s official. There is just one gold bracelet to be handed out after the Ukrainian Igor Dubinskyy took the penultimate one in Event #62: $1,111 Little One for One Drop.

Dubinskyy leaps into the top 10 all-time live tournament money earners in Ukraine after pocketing $637,539 for a victory that ranks as his best performance by some considerable distance.

It’s the second consecutive year that Dubinskyy has had good fortune at the WSOP after finishing in 192nd place at the 2013 WSOP Main Event for $42,990.

The final table contained heavyweights: Eric Baldwin and Matthew Lapossie but it would be the least experienced players who would take the lion share of the cash and that inexperience was never better demonstrated than the exit hand of Brandon Eisen in third place.

Eisen limped into the pot from the small blind and Theodore Driscoll checked from the big blind. The flop was [Qd] [Jd] [3d]; Eisen led for 200k and Driscoll called. The turn was the [9s]; Eisen checked, Driscoll bet 550k and Eisen moved all-in for 3.335m.

Eisen was bluffing with [Ad] [7c] but was ahead as Driscoll was only holding [Kd] [2h].

Now you would have thought Eisen would have been elated but his face was one of stunned incredulity. The dealer burned and turned the [2s], on the river, and Driscoll had hit one of his outs to send Eisen over to the rail and force heads-up action.

The final confrontation between Dubinskyy and Driscoll started with the Ukrainian holding a 2:1 chip lead and he never looked in danger of surrendering that lead. The final hand came after Dubinskyy rivered a straight against the flopped trips of Driscoll and that was the end of that.

Who said poker is dying?

There are 2,144 runners turned up for the second of three $10,000 Main Event starting flights and that means we now have 2,915 players in the books with more than that already pre-registered with the WSOP for Day 1C.

The man at the top of the chip counts is someone with a blank sheet of paper when it comes to live tournament cashes. The magnificently named Trey Luxemburger holding the chip lead with 193,450, meaning the Swede Martin Jacobson is still the only player to breach the 200K mark thus far.