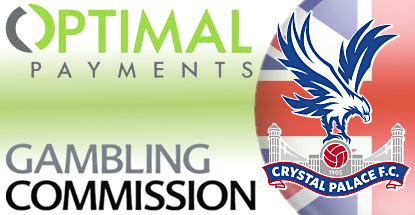 Optimal Payments, the UK-listed parent company of online payment processor Neteller, has inked a shirt sponsorship with Premier League football club Crystal Palace. The two-year deal will take effect this summer and will allow the Neteller brand to feature prominently on the front of Crystal Palace’s kit. The deal marks the first such sponsorship for a company in the online payments sphere. Crystal Palace kicks off its 2014-15 campaign against Arsenal on Aug. 16 at The Emirates Stadium in London.

While Optimal celebrates its new deal, a host of online gambling companies currently boasting high-profile sports sponsorships in the UK may find themselves on the outs as of October 1. That’s the date when the UK’s new gambling laws take effect, requiring all companies wishing to advertise their wares in the UK to hold a license issued by the UK Gambling Commission.

There are presently over half a dozen primarily Asian-facing online gambling firms licensed in jurisdictions like the Isle of Man or Alderney that hold Premier League partnerships of one form or another, but these ‘white list’ jurisdictions will no longer be recognized by the UK as of Oct. 1. The Commission has already said it isn’t interested in issuing ‘advertising only’ licenses to firms that don’t specifically target the UK market but wish to go on reaping the benefits of global brand exposure via sports sponsorships.

Last Friday, the Commission confirmed this stance in a meeting with lawyers representing some of these sites. Some operators had suggested the use of ‘green screen’ technology in order to ensure that stadium signage promoting these sites was visible only to television viewers, but it’s not clear whether problems might arise if the ads were visible to viewers watching from inside the UK’s borders.

A Commission spokesperson told eGaming Review that while it was “aware” of the technology, it was the operators’ responsibility “to check whether they are complying with the law” in attempting to employ the use of green screen workarounds. Bottom line, Asian-facing operators are either going to have to ramp up their UK-facing operations and submit license applications to the Commission by midnight on September 16 or find some other way of marketing themselves to football-mad Asian punters.