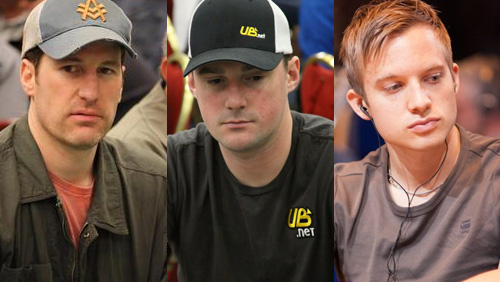 WSOP Day 38 recap sees Pat Walsh win the $10K PLO, Eric Baldwin headlining the Little One for One Drop final table, and Martin Jacobson romping into the lead in Day 1A of the $10,000 Main Event.

The last time Pat Walsh recorded a live tournament cash was back in 2011, when he beat Ali Eslami in heads-up action to take the $241,700 first prize in a $10,300 event in Los Angeles, and he has now followed that up by besting one of the toughest fields of the series.

Walsh is the winner of Event #65: $10,000 Pot-Limit Omaha (PLO) after outlasting a field of 418 entrants on his way to one of the biggest prizes in the series. His other two WSOP cashes also came in $10K events but you have to go back to 2010 to remember those.

The key moment for Walsh came when he eliminated both Tom Marchese and Alex Kravchenko on the bubble of the final table. That gave Walsh the chip lead and he would only relinquish it once, during heads-up action, but would remain patient enough to take it back when it mattered, and had the guile and game to finish the job off.

Isaac Baron, Marko Neumann and Matt Marafioti were three of the biggest names to make the final table.

Jackduyph Duong Leads the Little One for One-Drop Final Table

What a third day of action the Little One for One Drop had in store for poker fans. It started with 100 players and by the end of the days play there was only 9 remaining in one of the most exciting tournaments of the series.

At the top of the chip counts there is a gnat’s thong between Duong and WSOP winner Eric Baldwin with 3,180,000 playing 3,140,000. Baldwin will be hoping to go one place deeper than the runner up spot he experienced in a $1K event last year, and this is Duong’s second final table of the series after finishing fourth in the $3K Shootout.

The moment that everyone has been waiting for has arrived. The most eagerly anticipated tournament of the year has kicked off with 771 players turning out for Day 1A of the $10,000 Main Event.

Five former World Champions turned up to play and two of them ended up at the same table. Ryan Riess ending the day with 70,225, whilst Greg Merson ended the day with 7,125. Chris Moneymaker finished with 69,850, Tom McEvoy ended with 28,000 and we have already mentioned the great performance of Johnny Chan.

Superstars who are going to have to wait another 12 months for their shot at the big one include Jean-Robert Bellande, Marc-Etienne McLaughlin, Steven Gee, Bruno Fitoussi, Jason Mercier, Eric Froelich, Mustapha Kanit, Jeff Gross and Phil Laak.