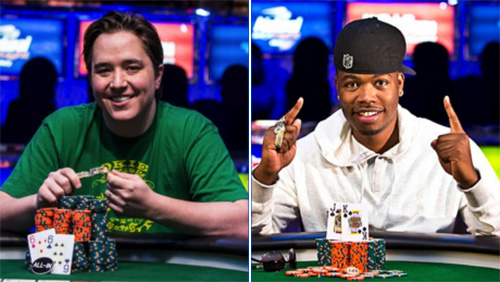 WSOP Day 29 recap sees Jordan Morgan overcome Evan McNiff in an epic heads-up battle, Will Givens continue his great run of form with victory in the $1k, Abe Mosseri has the chip lead in the $50k Poker Players Championship (PPC) and much more.

Two bracelets to catch up on today and the first has been slung onto the wrist of a young man from Oklahoma after an epic heads-up battle in the heart of the Thunderdome.

Jordan Morgan overcame Evan McNiff after seven hours of heads-up action saw the chip lead sway one way and then the other. Morgan now adds a gold bracelet to his circuit ring, after his pocket sixes dodged the AK of McNiff to hand him the $478,102 first prize.

“It was a grind for sure, “ Morgan told PokerNews before continuing, “It’s validation. I have been coming here for 10-years so it’s great to finally get the bracelet I have always wanted.”

Another spot on premonition from the mind of Davy.

Yesterday I told you to keep your beady eye on the progress of Will Givens and the man from Colorado didn’t disappoint.

Givens defeated Angela Prada-Moed in a short and shrift heads-up encounter to take his first major title of his career. His $306,634 will also be put to good use, as he will no doubt continue the little heater that is blazing a trail all around the WSOP.

“It’s been unreal. I learned a lot in the last $1k and I said you know what if I get back I am going to tweet what I did wrong. For each level I had a plan and stuck with it. People who know me know I have been working hard, so it’s good to see that hard work come off. Once I got deep and had that mindset right I am in the zone. I am locked in. “

WSOP bracelet winner Abe Mosseri has the chip lead with just 22-players remaining in the $50,000 PPC.

Mosseri is on course to cash in this event for the second time after finishing 11th back in 2010. He takes over a million chips into the fourth day of action and there are four more people who join him over that threshold.

Brandon Shack-Harris has over a million, and he is making a serious run at the WSOP Player of the Year award. He has already recorded a first, second and third, in different forms of poker, and he has to be one of the favorites to take down the title.

Matt Glantz, Robert Mizrachi and Frank Kassela are the other players above a million chips.

Jeremy Joseph has the chip lead with 689,000 chips, but the WSOP bracelet winner Simeon Naydenov is not far behind with 629,000.

Jonas Lauck is no stranger to the odd final table or two, Ryan D’Angelo is in the form of his life; British pro Rhys Jones continues a fine run of form that saw him take down the GUKPT title in Manchester recently, and Adam ‘Roothlus’ Levy has also made it and will no doubt be a force to be reckoned with.

He was the only player above the 100,000 mark but Jeff Madsen, Bryan Campanello and Tom Schneider have decent chip stacks in that one.