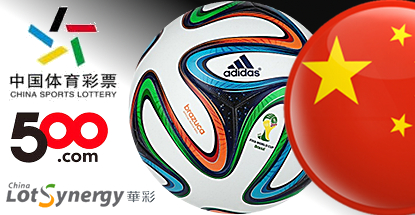 The 2014 FIFA World Cup is pushing China‘s sports lottery to dizzying new revenue heights. On Tuesday, the China Sports Lottery Administration Center reported that average daily sales have quadrupled to over RMB 400m (US $64.2m) since the World Cup action kicked off on June 12 and they’re still climbing. On June 21, sports lottery sales topped RMB 550m, a new single-day record. Estimated total sales over the tournament’s first nine days is around RMB 4b, nearly twice the RMB 2.3b generated during the entire 2010 World Cup.

Shenzhen-based online lottery operator 500.com is sharing in the World Cup bounty, as CFO Pan Zhengming reported current sales were three to five times the daily average prior to June 12. More than 30% of 500.com’s sports lottery sales in the second quarter came via mobile sales. Earlier this month, a 500.com exec predicted online lottery sales in 2014 would jump 70% over 2013’s RMB 42b.

Before the World Cup kicked off, 500.com was offering RMB 100m to anyone who could correctly predict the results of all 63 matches. With the number of upsets in this year’s tourney, it’s highly doubtful anyone will collect on that offer, but definitely not from lack of trying. China Daily reported that the Alibaba Group’s retail site Taobao.com was serving 6m bettors via the site’s online lottery platform by day three of the football action.