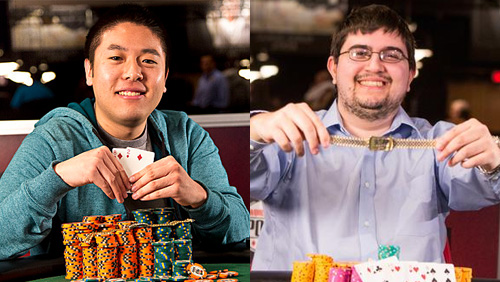 WSOP Day 23 recap sees Brian Yoon win his second bracelet in consecutive years, Steve Wolansky erases the heartache of a runner-up finish in 2013 to take gold this time around, and much more.

Incredibly, Yoon’s victory comes just one year after he topped the massive field of 4,756 players in last years Little One for One Drop, earning over $1.2m in two years of competition.

Yoon has a 100% record when it comes to finishing off WSOP final tables, and he had to do it the hard way with the two-time WSOP bracelet winner, Josh Arieh, standing in his way.

Arieh always comes to Vegas ready to play; rarely leaves without making at least one final table, and has already made two this year. Special mention should also go to Mustapha Kanit. The Italian has now finished fifth, fifth and seventh to maintain the form that saw him win two side events at the Aussie Millions at the start of the year.

241 players entered this lesser known event and Steve Wolansky was able to erase the misery of finishing second in the 8-Game Mix last year, by topping the field in this one.

Wolansky came into the final table with the chip lead and 77 hands later he would have all of them after defeating the irrepressible Joseph Cheong in heads-up action.

With $700k taken out of the Bellagio High Roller games, just this year, it’s tough to feel sorry for Cheong, but this is the third time he has come up short at the final stage of a WSOP final table.

Bad luck, or more practice at the heads-up tables?

Only Cheong knows the answer to that question.

There was also a familiar face in third.

The Borussia Monchengladbach striker, Max Kruse decided to head to the WSOP after failing to make the German World Cup squad. Whilst his $36,494 third prize is not going to brush away the disappointment of not being in Brazil, it’s better than pissing down the front of your new white chinos.

The Dutchman, Marcel Vonk, leads the final 11-players as Event #37: $1,500 Pot-Limit Omaha (PLO) reaches its final day of action. A prize of $264,400 awaits the winner in that one, and Vonk is chasing his second bracelet. Out to stop him is the likes of Galen Hall, Kevin Saul and AP Phahurat.

It took him eight years to win one, and now George Danzer could win two in one series, as the German leads Event #38: $10,000 Seven-Card Stud Hi-Low Championship with just 13-players returning for a third and final day of action. Danzer has a huge chip lead on the field after bagging up 785,000. Jeff Lisandro is second with 420,000 and there are a whole host of stars remaining in that one.

Event #39: $3,000 NLHE attracted 992 players and 205 survived the first day of action. Daniel Makowsky has the chip lead in that one, and he is one to keep an eye on with a whole host of WSOP final table appearances to his name. WSOP bracelet holders James Mackey and James Dempsey both have chips moving into Day 2.