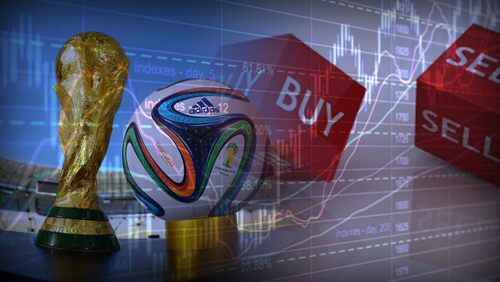 It’s tempting to try to make some capital gains on a World Cup bump. Intuitively it makes sense. Betting  volumes increase everywhere as gamblers pick their favorite teams. Occupancies jump at casino hotels as World Cup fever reaches its climax. Companies are obviously making money, so doesn’t it make sense to go long here in general and sell in mid July when the frenzy is over and we all find out which team is the best at soccer (or football)?

Not necessarily. Big stock gains generally come on unexpected developments, not on events that everyone knows about. The World Cup bump is more of a “buy the rumor, sell the fact” novelty, though of course the World Cup itself is hardly a rumor. Companies are expected to make more money in June and July every four years. If they don’t, a stock can take even take a hit. With rising expectations comes lower gains, or even losses.

No need to stay stuck in market theory. We can see this empirically. Let’s start with an overall look using the Market Vectors Gaming ETF, BJK.

The chart above is the price action of the gaming ETF during the last World Cup, which began on June 10 and ended July 11, 2010. On June 7 of that year traders started buying the Cup. By the time the international tournament started, BJK was trading at $24. Then the momentum died in the middle of all the sports excitement, while the big gains only came after the whole thing was over. Like most market phenomena, it is almost the opposite of what one would expect.

We can also zoom in on some companies in particular and see if the same thing applies, focusing in specifically on sports betting, which intuitively would feel the most impact from any World Cup bump.

Taking a look at Ladbrokes (LAD), we see roughly the same pattern.

Nothing appreciable happened as World Cup 2010 began, and Ladbrokes actually sold off by the middle of the tournament. The same thing seems to be happening now, with Ladbrokes not moving much at all as the World Cup gets into full swing. We actually see an inverted pattern during the 2006 World Cup, but the same net moves.

The matches began on June 9, 2006 with Ladbrokes trading at 388, and ended at 389.50 on July 10. Leading up to it there was a mild selloff, a peak by the middle on July 3, and by the end of the World Cup it had settled back down to where it was at the beginning.

How about William Hill (WMH)? Same thing. 178 at the start of the 2010 games, 179 by the end, with a mild selloff in the middle. Had one taken the World Cup trade with Hill in 2006, there was a mild 3% gain from start to finish, but nothing too exciting.

Rank Group (RNK) below actually tanked over the course of World Cup 2010, losing 12% from start to finish.

As for this year, BJK has shown no significant movement since the start of the 2014 World Cup, but for people who want to try the World Cup trade, the charts of the last two games can teach us one thing. Don’t focus on any one company, but if there’s a selloff in the heat of the tournament, buy the dip. And if there’s a quick climb, sell into the rally. Basically not much different than your every day average trading advice. The only minorly significant trending move I can make out here is that there tends to be mild selloffs in the week or two prior to the World Cup starting, but it’s too late for that now.

The conclusion is, there is no “World Cup trade” so don’t try it. Gaming companies are supposed to have higher revenues during World Cup season. If they don’t, they’re in big trouble, and if they do, traders don’t care all that much.