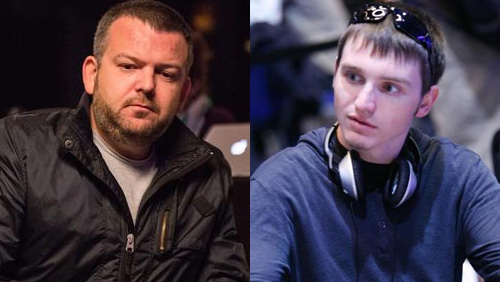 WSOP Day 17 recap sees the British pro John Kabbaj take the first bracelet for queen and country; Kevin Eyster overcome a formidable final table to win his first bracelet in the $5k Six-Max and much more.

What a great couple of years it has been for the American Kevin Eyster.

In 2013, Eyster captured his first major title when he reigned supreme in the World Poker Tour (WPT) Seminole Hard Rock Showdown, and he has followed that up with his first WSOP bracelet victory in Event #24: $5,000 Six-Handed No-Limit Hold’em (NLHE).

The final table was as tough as old boots with the likes Pierre Neuville, Andrew Lichtenberger, Bryn Kenney and Jeremy Kottler all owning the tools to take this tournament apart.

Eventually it would be the old stalwart, Neuville, who would make it towards the end zone, to face Eyster for the title.  But, alas, it wasn’t to be a second WSOP bracelet for Belgium, as Neuville fell at the final hurdle in a major tournament, for the third time in his career.

Special mention must go to both Lichtenberger and Kenney. Both players have made major changes to their lifestyle, in the past 12-months, and it’s great to see that pay dividends on the felt.

During yesterday’s recap I told the world to keep an eye on John Kabbaj, and he didn’t disappoint me by winning his second gold bracelet, and $267,327 in prize money, after defeating Thomas Keller, in heads-up action, in Event #25.

Kabbaj bagged the first British bracelet of the series after overcoming a final table that housed the likes of Erik Seidel, Mike Leah, Joe Tehan and Tom Schneider.

Seidel, who was searching for his ninth bracelet ended up in sixth place, and Schneider played the role of short stacked ninja to great effect to finish in eighth.

Kabbaj won his first bracelet back in 2009, in a Pot-Limit Hold’em (PLH) event, and sees his earnings tip over the $2.5m mark.

The event made social media headlines after Mike ‘The Mouth’ Matusow received a one round penalty for celebrating too loudly. The man who is planning to set Hollywood alight, when his autobiography is made into a movie, voiced his own self-approval after winning a 200k pot, only to be sent to the rail.

The Mouth was so irate that he busted just five hands after returning to the table. He cashed in 19th place.

The WSOP bracelet holder will have his work cut out; however, with the likes of Dan Smith (887k), Will Failla (421k) and Heinz Kamutzki (358k) still in contention for the title.

The baby H.O.R.S.E contest is underway and 743 players turned up to once again re-enforce the popularity if this type of game.

Day One finished with 144-players remaining with chips and Jason Riesenberg leads the way with 72,600 of them. Multiple WSOP bracelet winners Huck Seed and John Monnette are also perched nicely at the right end of the chip counts.

Finally, Event #28: $10,000 Pot Limit Hold’em Championship has started and 160 players turned up for that one. Tony Ruberto leads the action, with 203,300, but there are stars aplenty just behind him including John Juanda, Michel Abecassis, Benjamin Pollak, Alex Bilokur, Dan Shak, Antonio Esfandiari, Michael Rocco, Pratush Buddiga and Chino Rheem.