Home / Poker / Bertrand “ElkY” Grospellier: Keeping Up with the Joneses 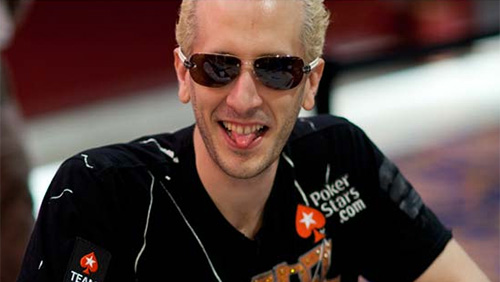 Lee Davy sits down to talk to the PokerStars Team Pro, Bertrand “ElkY” Grospellier, about his late arrival at the World Series of Poker (WSOP), his worst run of cashes since 2006, and much more.

In 2013, Bertrand “ElkY” Grospellier earned $427,925 in live tournament cashes.  Whilst that’s not an amount to be sniffed at, it’s a far cry from the seven figure annual hauls that ElkY has grown accustomed to.

So what’s going on with the game of the man who the Global Poker Index (GPI) declared was the sixth most successful live-tournament player of the decade?

Does his smallest haul since 2006 mean that something has gone wrong, or are we just seeing variance catching up with him?

“2013 has not been that good actually. I think it’s a combination of everything. The game got tougher, for sure, and there is also some variance, and… I don’t know.”

Has your game improved?

An honesty that touches me. I wasn’t expecting it. I was expecting the usual stock answers that I hear so many times. ElkY and a touch of vulnerability. You don’t see that everyday.

So how does ElkY improve his game?

“I watch videos and live reporting of final tables. I also talk strategy with friends and my fellow teammates. It’s really important to talk strategies and have different views about your hand, especially when people disagree with your view. I also like to improve upon my preparation and I am taking up meditation to be calmer at the table.”

ElkY is not the only player to be focusing on his mental game. Is he the type of player who gets rattled on the felt?

“When I am at the table I don’t get angry at anyone, but it’s mostly when I bust. When I am in the tournament I don’t have problems, but it’s mostly post tournament that I want to improve. Also being more prepared can really help, especially when you are playing so long. At the end of the day, a lot of people get tired, and have a lot of worries. You need to be able to exploit these things. It’s easier to get an edge this way because everyone is technically very good.”

Scott Seiver was saying the same thing just the other day. When searching for edges in a game that has gotten so close, in terms of technical abilities, you have to turn to the mental side of the game.

“Yeah for sure. I think it’s the same at the top of any sport, like tennis for example. It’s always mental. It was also the same when I played StarCraft in Korea. Some times people would just choke when they were on stage.”

So how is he feeling now?

ElkY very nearly didn’t make it out here because his passport was stolen, so surely he feels good?

“I feel great. I finally got here and this is my second event. I played the Shootout and have a bunch of chips in this {$10k H.O.R.S.E}.

“I got my bag stolen in Toronto and I had a bunch of stuff in it including my passport. It’s really hard to get a new one back in France. You can only get it under emergency procedures for work reasons, so I got pretty lucky to have it in 10 days, because it normally takes up to a month.

“I live in London, but I couldn’t go back to London because I could only get a flight to get back to France from Toronto because I had no I.D or anything. Then my file was in London and so that took even longer.”

ElkY went on to cash in the H.O.R.S.E event finishing in 16th place for a slight profit.

And do you know what happened the last time ElkY earned a six figure annual score starting with the number four?