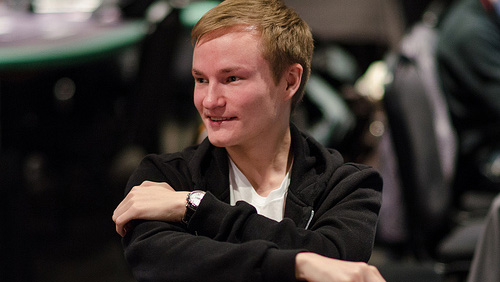 Lee Davy sits down to talk to Lauri Pesonen about the recent invasion of his hotel room at the Rio, life in Finland and much more.

The curse of the poker player strikes once again as thieves target the hotel rooms of poker players staying at the Rio All Suite Hotel & Casino in a series of robberies.

Lauri Pesonen and Joni Jouhkimainen, two professional poker players hailing from Finland, were amongst the victims, and I sat down with Pesonen during a break in Event #4 $1K No-Limit Hold’em (NLHE) to ask him about the experience.

“On Tuesday, my roommate and I left the room at 4:00 p.m., to play cash games in the Rio. We played for three hours, had dinner at the Asian place and then returned to the room at 7:.30 p.m. When we arrived, we saw our door was open and immediately realized both of our laptops were missing, so we went down and called security.

“Yesterday morning we noticed our bathroom bags were missing, and also Joni’s sunglasses. Our iPads, cameras and wallets were untouched. So it kind of relates to the story of what happened in Barcelona when they only took Jens’ [{Kyllonen]} laptop and nothing else.”

The breach of security in Barcelona seemed to be a clear attempt to break into the laptop of Jens Kyllonen and to plant a Trojan device so his online action could be monitored.

“Did Lauri believe that Joni and him were victims of the same scam?” I asked.

“Well, it would be rather silly for it to happen in Vegas because we aren’t going to be playing online—at least for a month anyway.”

“Probably the dumbest,” he answered.

This problem cannot be picked out as an isolated issue, because it seems to be on the rise. It was just days ago that I wrote an article about the plan to kidnap Martin Staszko; and back then, I warned players to be on their guard, so was this something that Pesonen had given some due diligence thought to?

“No, not really. This is my first time in the USA, and so I have more cash on me than normal. Generally, in Europe when we go to the EPTs we don’t have to carry any cash because we can register for our tournaments through the Stars software. So I never really worried about it until now I guess.”

Pesonen jabs his fork into a piece of salmon and drops it into his mouth, as I ask him, “How long he has been in the States?”

“We flew to California on 11th of May, for my birthday. Me and five other guys, and then three other guys joined us a week later. We had a house in Anaheim and have been having fun and watching the NHL playoffs.”

Hockey is a big deal in Finland; well that’s what Lauri told me anyway. He also told me that it has one of the highest suicide rates in the world.

So I did, and there they are ranked number 21 in the world, with Greenland holding the top spot and Lithuania just behind them in second. It seems dark nights and Tony G has a lot to answer for.

“We love the Finnish summer. It’s so great. The rest of the year is bad, so you don’t really want to miss the summer. This is why we travel on the EPT circuit. It’s so we can see sunshine. You don’t see sunshine in Finland until June. On the 20th of May, my girlfriend sent me a photo from my balcony, and it was snowing, so I would much rather be here.”

Dark skies and the hangman’s noose aside, Pesonen loves Finland. He is a highly successful poker player, earns a decent chunk of change, is young and is adventurous. “Why else would he remain in his homeland if not for love?”

“I have my own place where I live with my girlfriend. She is starting a new job soon and that’s important to us. Finland is safe, clean and everything works really smoothly. We have the smallest corruption rate in Europe, if not the world.”

And I guess people don’t break into your homes and steal your stuff!