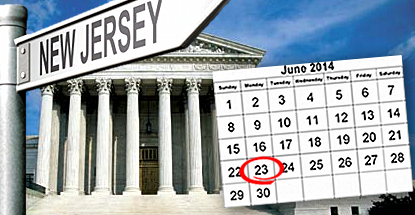 New Jersey will learn next month whether the US Supreme Court will consider its quest for legal sports betting. The SCOTUS blog that tracks the Court’s activities noted the addition of the New Jersey case to the Court’s conference schedule for June 19. The conference is the forum in which the nine Justices of the Court consider the various petitions seeking to be heard, and at least four Justices must find the legal arguments convincing and/or interesting for a case to proceed. Either way, New Jersey will learn its fate when the Court publishes the results of its conference on Monday, June 23.

New Jersey is seeking to overturn lower court decisions blocking the state from implementing the sports betting legislation Gov. Chris Christie signed into law over two years ago. Opposing New Jersey are the US Department of Justice, the NCAA and four major pro sports leagues. Whether or not the Court decides to hear the case will hinge on New Jersey’s argument that the federal PASPA sports betting prohibition is unconstitutional because it (a) favors Nevada while discriminating against other states and (b) commandeers state authority by requiring states to enforce a federal edict for which no regulatory structure exists.

The statistical odds of the Court agreeing to hear any of the petitions filed each year are staggeringly low – a success rate of 0.0375% last year – yet Becker & Poliakoff attorney Daniel Wallach has suggested the federalist questions raised by New Jersey’s case might appeal to the Court’s conservative faction. Should the Court agree to hear New Jersey’s appeal, the state would have 45 days in which to file new briefs arguing its case. The DOJ et al would then have 30 days in which to file their response followed by another 30 days for the state’s reply brief. At best, Wallach suggests oral arguments could commence by November or December, but early 2015 appears more likely.

But hey, even if the Court declines to hear New Jersey’s case, there’s always the nuclear option.