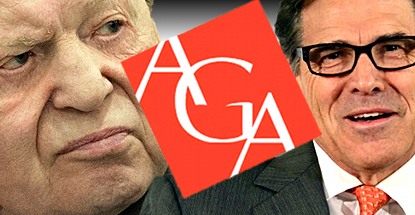 Just five months after American Gaming Association CEO Geoff Freeman publicly declared the AGA’s official position on online gambling to be “focused on preventing prohibition,” the AGA now says it will focus on taking no position whatsoever. Freeman told the Wall Street Journal that dissension within the AGA’s ranks had made online gambling “an issue that the association cannot lead on.”

The AGA is split between pro-online camps (Caesars Entertainment, MGM Resorts and others) and the vehemently anti-online Las Vegas Sands, who get occasional assistance from Wynn Resorts. The AGA’s hand was forced in February after Sands chairman Sheldon Adelson (pictured glowering on the left) threatened to withdraw his AGA membership – along with Sands’ contributions to the AGA’s operating budget – unless the AGA dropped its support for online gambling. Jan Jones, Caesars VP of government relations, recently told the Los Angeles Times that Adelson was “very bright, but has gotten more opinionated the wealthier he’s become,” and that “once he gets an opinion, he’s not likely to change his mind.”

Among those not afraid to maintain a consistent stance on online gambling is the National Governors Association (NGA), which wrote a letter to congressional leaders earlier this month expressing their opposition to federal efforts to ban online gambling. As with previous objections to Washington making gambling decisions that have traditionally been left up to the individual states, the NGA is warning that “decisions at the federal level that affect state regulation should not be made unilaterally without state input.”

RICK PERRY’S LATEST ‘OOPS’ MOMENT
Not all governors are on board with the NGA’s efforts, as evidenced by the recent National Review op-ed penned by Texas Gov. Rick ‘Oops’ Perry (pictured above right). Perry has devised a novel argument for why Congress should approve Adelson’s online gambling prohibition legislation, namely, freedom from government overreach.

Perry claims that online gambling proponents “are seeking to create, for the first time, formal government oversight and enforcement of a specified class of internet content.” Perry accuses both state and federal online gambling backers of wanting to shove more gubmint down your throats – although his examples of legislation calling for national online gambling oversight bodies are entirely federal – while ominously suggesting that Big Brother will use these new “broad and intrusive powers … to create a new breed of government internet-content cops.”

Perry also rubbishes state-level online gambling initiatives because they would “smother innovation and growth” by erecting “digital roadblocks at every state border, putting a huge burden on commerce.” Perry bizarrely cites the Federal Aviation Administration as an example of good federal oversight because it prevents airplanes from having “to stop at every state border to ensure they were in compliance with the next state’s rules.”

It’s probably worth noting that in the most recent annual literacy study of the nation’s 77 largest cities conducted by Central Connecticut State University, Texas placed four cities in the bottom five. Perry has recently started wearing Clark Kent-style glasses in public, apparently in a bid to make himself appear more cerebral, because Lord knows nothing coming out of his mouth has so far done the trick.