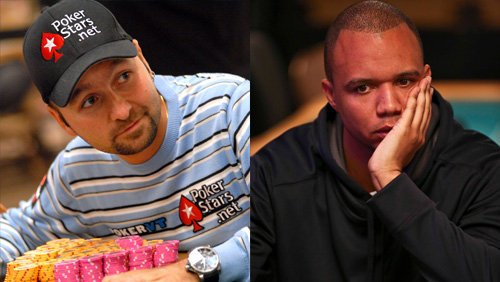 WSOP bracelet betting has become as much a part of the furniture as Doyle Brunson’s motorized chair, and the latest pair to issue their odds are the tag team of Daniel Negreanu and Phil Ivey.

Daniel Negreanu and Phil Ivey are offering an even money bet that either one of them will win a bracelet at the World Series of Poker, but is it a good bet?

When it comes to tag teams there are two very different ends of the spectrum. On one end you have The Bushwhackers and on the other end you have Demolition. Daniel Negreanu and Phil Ivey are Demolition.

If you don’t understand the wrestling analogy then let me simplify things for you.

The tag team of Daniel Negreanu and Phil Ivey is likely to beat the crap out of anything you put in their way. So when I saw Kid Poker tweeting that he was teaming up with Ivey to offer the world even money that one, or the other, would win a bracelet at this summers WSOP I didn’t want to take the bet.

Then I did something unusual and sat on it.

Firstly, let’s be clear, this bet only relates to WSOP bracelet events held in Las Vegas. It does not include the action that will take place in Melbourne as part of the WSOP APAC event that has pushed WSOPE into a field full of horse shit this year.

Ivey has won eight WSOP Vegas born bracelets, and Negreanu has won 50% of that total. In the context of things that’s a decent haul, but Ivey as been braceletless since 2010 (although he did miss a whole series in the time since), and Negreanu has not won one since 2008.

Perhaps, the pendulum is swinging in the other direction?

“It’s a tough one. I would say 60/40 in favor of Daniel getting the best out of this bet.” Said Betting Emporium co-founder, and quite a smart bettor himself, Mr. Neil Channing.

One of the reasons Daniel could be getting the best side of this bet, is the fact that there is going to be more $10k mixed events, and these are very likely to create field sizes that are more like Ben Nevis than Mount Everest.

Nine of those combined 12-bracelets have come in non-Hold’em events, just going to show the strength of the pair in these formats – Ivey especially.

“My initial feeling was to take them on, “said Mike ‘Da Bookie’ Hill, “ but on a study of the stats probably best left alone. Ivey is always up for the WSOP and Negreanu plays so many events. Perhaps, evens on Negreanu winning a NLHE event or Negreanu on his own would have been a better bet?”

Another crucial aspect to this bet is the BIG ONE for ONE DROP. Phil Ivey has already pushed his mass of green bricks over the Rio counter, and right on cue, Daniel Negreanu has started selling 50% of his action (if you fancy a piece and have a minimum of $5k spare then e-mail his assistant [email protected]).

There is a cap of just 56-players in this event and during a recent chinwag with Sam Trickett, he told me that this event is easier to win than you would imagine.

“One or two big hands go your way and you are on the final table.” Trickett told me.

With Ivey and Negreanu in the 56-player field that represents a 3.57% chance that they will win a bracelet.

So would I take the bet up?

I would leave this one and possible wait for the action that Daniel ‘Jungleman’ Cates puts out after he confided in me, this week, that he will be putting out some bracelet bets of his own.

Now there’s a man who will offer you some great odds.

If I don’t know you, and you want to bet against me and Ivey winning a bracelet this summer, email [email protected] for wiring info.

Min bet is $5k against me and Ivey winning a bracelet this summer and the odds are even money. One of us wins- you lose. Simple.