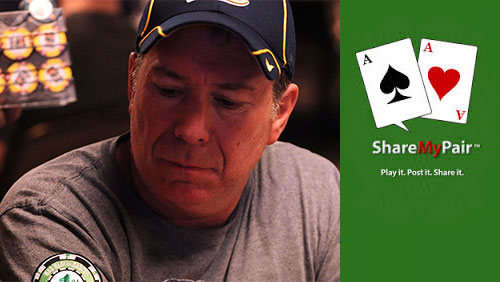 Lee Davy sits down with Steve Miller, the creator of ShareMyPair, a new social networking platform and app for poker players, to find out a little bit more about the company and its plans for the future.

Is there anything more tedious than having to pretend that you are listening to the minute details of your friend’s bad beat stories?

Well that’s about to change courtesy of Card Shark Media Inc. and their new toy, ShareMyPair, the first social networking platform and app for poker players.

ShareMyPair is a hand replayer tool that allows users to enter the specifics of their hands so they can be watched back and shared with peers as an animated video.

The concept of hand replayer’s is not a new one, but it is a first for a device to be created for use in the live poker arena, and the idea comes from the minds of Steve Miller and Rich Sondheimer.

The app is available on all iOS and Android devices and Miller and Sondheimer have hit the ground running with none other that Mr. WSOP himself, Phil Hellmuth Jr., promoting the app. 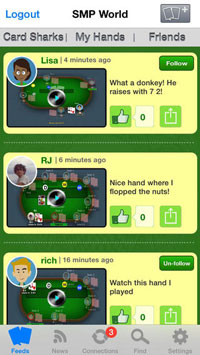 Miller explains: “The world of poker can be a strange place. There are so many entrepreneurs all claiming to have created the latest and greatest poker product, and yet most of them always turn out to be pretty junky. So despite having a lot of ties with prominent people in the industry, trying to get them to take a look at my app was like pulling teeth.

“Eventually, I managed to persuade Hellmuth’s business manager to take a look at the beta version and he loved it. He said ‘Steve, get on a flight to San Francisco and show this to Phil,’ so I did. Phil loved the product and after I tied up some loose ends with his agent Brian Balsbaugh, we secured a deal which I think is very advantageous to us, and Phil can really see the long term potential of the business and so he came on board on an equity only basis.”

Snagging the name of Phil Hellmuth is a masterstroke. If the top poker players in the game start using ShareMyPair then there will be a cavalcade of poker players who will also join the throng. A perfect social media device, and Hellmuth isn’t the only player who has climbed on board the ShareMyPair express.

“We are actually looking for more players so we can get a really good geographical coverage. Hellmuth appeals to everyone. Then we have the likes of Greg Raymer who appeals to the mass market of recreational players who watch a lot of their poker on the TV, but may not necessarily interest the grinders, and then we have Jonathan Little and Faraz Jaka, who really resonate well with the active core poker player.” Said Miller.

Getting a strong range of pros on board is going to create a bigger user base for reasons that Miller and Sondheimer didn’t even think of when the app was first created.

Once again Steve Miller explains: ‘When we started work on the app we thought it would be a device for players around the world to share their bad beat stories. Instead, it has turned into an instructional site. Users have been posting their hands and asking the open-ended question, ‘could I have played this hand differently?’ and the responses have been very insightful. 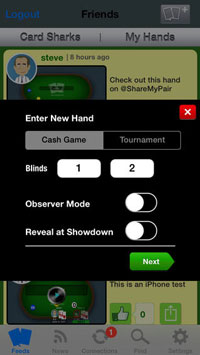 “So the primary role of the ambassador is to just use the app, but we have also been asking them to critique the hands of the amateurs. Imagine having your hand critiqued by Phil Hellmuth, Greg Raymer, Faraz Jaka or Jonathan Little? It’s a tremendous thrill for them, it makes them feel great, and that’s an added benefit to us.”

Miller has been involved in the poker industry for quite some time now. He has been a fervent lobbyist for the Poker Players Alliance (PPA) and also worked with Daniel Negreanu on his first two poker books.

So he knows how important it is to create partnerships with the people that matter, and he has already started those discussions, especially with the live tournament organizers, where Miller believes his app will one day be used as the foremost method of communicating hands between live players.

“We have had some discussions with the World Series of Poker (WSOP), but they are in a ‘wait and see’ position at the moment, and I totally respect that,” says Miller before continuing to tell me about discussions he is having with the World Poker Tour Amateur Poker League (WPTAPL), the National Poker League in Australia, and also networking as far off as Brazil.

The app is free to download and use, and once you have entered the details into the device it is incredibly easy to share amongst your social media circles, e-mails or text.

Miller and Sondheimer’s main mission at the moment is to build their user base before switching to revenue generating mode. They foresee the future whereby they own a database that can create player-centric products that can really drill down to the detail for their eventual partners.

As Miller explains, “There will come a time when we can offer a specific product to a player in Germany who plays microstakes cash games. That’s how targeted we believe we can get for our partners.”

Not only does the app have the potential to create massive value for eventual partners in the poker industry, but also it is a beautiful setting for advertising, with the ability to promote a product/logo on the hand replayer poker table, and many other non-invasive advertising opportunities.

The app only provides the ability to share Hold’em hands, but expect this to expand as the user base grows and the company starts to gather a head of steam.

Not only is ShareMyApp a great way to get your bad beats into the ether, but it’s also a great instructional device, a perfect way to share poker stories on a peer-to-peer basis, and a tremendous business model that I expect to do very well in the future.

“I believe that one day this will be the primary way that players share their hand information between peers,” says Miller.

I happen to believe him 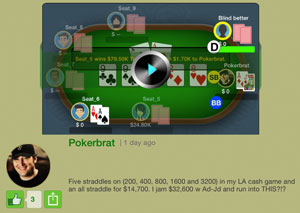