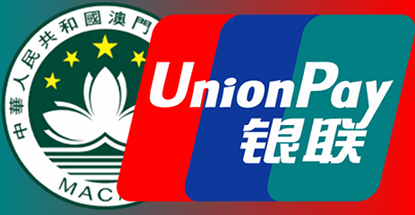 Shares in Macau casino operators took a pounding on Thursday after China announced it would impose restrictions on the use of state-backed payment processor UnionPay. By law, Chinese citizens are permitted to take RMB 20k (US $3,200) in cash out of the country per trip, with a RMB 50k annual limit. Tourists are also allowed to withdraw up to RMB 10k per day via their UnionPay debit cards. Handheld devices allowing such withdrawals have become ubiquitous in and around Macau casinos, but China has never authorized their presence outside the mainland.

On Thursday, Macau police announced they’d arrested 12 individuals in February and March following a lengthy investigation. The suspects had reportedly obtained the UnionPay mobile devices on the mainland then illegally transported them to Macau. A UnionPay official told Bloomberg that the company had “always prohibited cash-back activities through bankcard transactions that are made without actually making purchases.”

The South China Morning Post reported that the use of the handheld devices had caused a 40% slump in business at Macau’s pawnbrokers, which have carved out a lucrative niche allowing customers to use their UnionPay cards to purchase expensive items such as wristwatches, then immediately exchanging them for cash with the pawnbrokers claiming a commission of 5% to 10%. This practice has helped fuel Macau’s booming ranks of mass market gamblers, who lack the cachet to secure credit from VIP junket operators.

Deutsche Bank AG analyst Karen Tang suggested the UnionPay handheld card-swiping was responsible for as much as 12% of mass market turnover. Should nothing arise to replace this funding source, casino operators could see earnings fall as much as 6%. While VIP gambling accounts for nearly two-thirds of Macau casino revenue, the mass market accounts for 70% of operator profits. However, pawnbrokers are celebrating the crackdown, expecting their business to ramp up accordingly.

VISA CRACKDOWN IMMINENT?
If the UnionPay crackdown wasn’t enough, China may soon be imposing tighter controls over Macau tourist visas. China’s Individual Visit Scheme (IVS) limits mainlanders to two visits to Macau per year. But mainlanders who claim to be traveling on to a third destination from Macau are allowed two trips within a 30-day period. If they can actually prove that they made it to the third destination, they are allowed more than two visits. The process also resets after the 30-day period.

But Macau officials say around 2m of the last 3.6m ‘transit passengers’ who visited Macau never actually made it to that third destination. State broadcaster China Central Television aired a report over the weekend saying plans were in the works in which visitors who fail to make it to a third destination would receive a special stamp on their passport that could make obtaining visas more difficult in future.