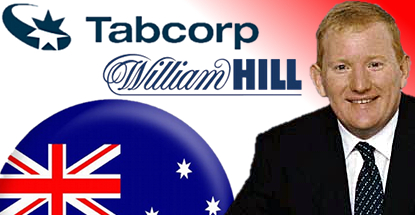 Australian betting operator Tabcorp “delivered a stronger rate of growth” in its fiscal Q3 thanks to good performance in its fixed-odds, online and international divisions. Overall revenue in the first three months of 2014 was up 2.5% to A$492.3m (US $456.7m). Media & International revenue was up 4.2% to $54.3m, keno revenue fell 1.4% to $50.9m and gaming services division TGS was flat at $24.2m.

WILLIAM HILL AUSTRALIA SHAKES UP SENIOR MANAGEMENT
Changes are afoot at William Hill’s Australian operations. Earlier this week, the Sydney Morning Herald reported that Michael Sullivan (pictured) and Anthony Waller were headed for the exits as Hills looked to shake up its senior management. Sullivan was the CEO of Sportingbet Australia from its launch in 2002 until the company was acquired by Hills in late 2012, after which Sullivan became CEO of Hills’ Australian operations, which also include Sportingbet offshoot Centrebet and Tomwaterhouse.com. Waller had been acting as Hills Australia’s chief operating officer.

In response to the rumors, Hills originally issued a statement saying the parties were “in discussions about the future of the leadership of the Australian operations.” On Thursday, Hills announced that Sullivan was out, with James Henderson, Hills’ Group Director of Operations, acting as interim CEO until a permanent replacement can be found. Sullivan was diplomatic, saying “all parties are happy” and wished Hills all the best. Sportingbet issued a statement saying “both William Hill and Michael believe the time now is right for him to pursue other challenges.’’

It was only in September that Hills CEO Ralph Topping was saying Sullivan was “as good as I’ve worked with” and “would be my number two” if Sullivan was based in Hills’ home base in the UK. It’s unclear what the shakeup will mean for the £15m bonus Sullivan and three other Sportingbet execs were promised when Hills acquired the company. The bulk of that bonus was to be paid in 2017 and 2018, with the final sum tied to performance criteria.

Hills’ Australian plans can charitably be described as ‘fluid.’ Last March, Topping insisted there would be no rebranding of its Aussie acquisitions. In September, the company was talking about scrapping its new brands in favor of operating “a single market brand that we know will appeal to all segments.” In December, Sullivan announced the rebranding was off again after Hills realized the individual brands were “probably stronger in Australia then they thought.” Or so he thought.