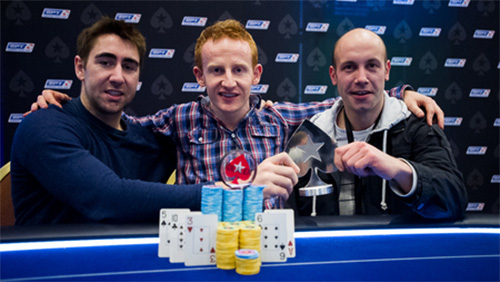 Can you imagine how good he would be if No-Limit Hold’em (NLHE) was Dermot Blain’s favorite game?

The young Irishman prefers to four cards to the two that has just earned him his first major victory since his APPT Macau success back in 2009, but that hasn’t stopped him pocketing €200,900 – his third largest score of his career.

The Full Tilt Poker (FTP) Brand Ambassador has now earned over $1.7m in live tournament earnings, and when you consider the quality of the field, it must rank as his most impressive performance to date.

The final table was a bit lively as well with the former EPT Champions David Vamplew and Mike ‘Timex’ McDonald joining the likes of Max Greenwood, Thomas Muhlocker, Patrick Bruel, and of course Blain himself.

“I had to concentrate really hard and I ran really well at the end. It feels amazing. I play a lot of the mid stakes PLO games on Full Tilt and a little bit on PokerStars. Maybe with the extra money I can afford to play a little higher now.” Blain told PokerNews Sideline reporter Sarah Grant after his win.

The Brazilian player, Marco Oliveira, has won was might rank as the smallest prize in EPT Grand Final history. The 28-year old defeated a field of six players to win €750 in the €200 2-7 Single Draw 6-Handed Turbo event. He beat Thomas Couquet of France in heads-up action and told PokerStars that he was going to ‘go wild with the money.’ I don’t even think it will buy him a round of drinks.

Other stand out names that have taken side event’s at the Grand Final include Michael Telker, Paul Berende, Scott Seiver and George Danzer.