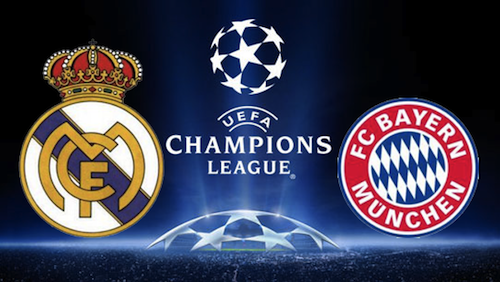 Don’t feel too bad if you treated the Champions League semi-final match between Atletico Madrid and Chelsea as an undercard to tonight’s main event between two of the premier football clubs with 14 Champions League and Europa League titles between them .

Defending champions Bayern Munich visit the Santiago Bernabeu Stadium for a pivotal clash against Real Madrid in a match that has Champions League final written all over it. But alas, the luck of there draw pitted these two giants one round short of Portugal, and yet, the magnitude of this titanic clash shouldn’t be underestimated.

Bayern have been the class of European football for over a year now, but even if they’ve once again flexed their invincibility in the Bundesliga, the Champions League has been a different matter for the German squad. For a squad that should be head and shoulders above the rest of the field, Bayern looked nowhere close to their elite level against Arsenal and Manchester United. Sure, they beat both English clubs to make it this far, but neither the Gunners nor the Red Devils have the firepower of the Galacticos, and if the Germans continue to display sub-par form (for their standards), they could be in a world of trouble.

Fortunately for Bayern, questions do surround Madrid’s dynamic duo as the status of both Cristiano Ronaldo and Gareth Bale are still up in the air. Both are expected to be in the first 11, but Ronaldo still has some knee issues to deal with and Bale likely hasn’t recovered from the reported flu he had over the weekend. But with a match of this magnitude, expect Ronaldo and Bale to be in the lineup, giving Bayern Munich little room for error if it hopes to go back to Germany on the winning side of the tie.

Expectations call for a doozy of a match between the two football titans. Ronaldo and Bale are going to pose a threat to Bayern’s defense the likes of which the latter hasn’t seen in a while. But for the attacking might of the Spaniards, the Germans do have a capable back four led by captain Philip Lahm and David Alaba to keep Ronaldo and Bale in check.

Naturally, odds for the match has Bayern Munich as short underdogs at 2/1 odds for a road win, compared to 6/4 odds for a Madrid home victory. A draw has been set at 5/2 odds, a result that paid off handsomely during the scoreless draw  between Atletico and Chelsea last night.

So where’s the value here? If health weren’t an issue for Madrid, we’d go with the home side to win, 2-1. But none of us really know for sure just how healthy Ronaldo and Bale are. We don’t doubt that they’re going to play, but the more important question is, are they fit enough to make a difference?

Against any other team, we’d say yes. But against the defending champions, who in their own right have a lot to prove, we’ll say no.