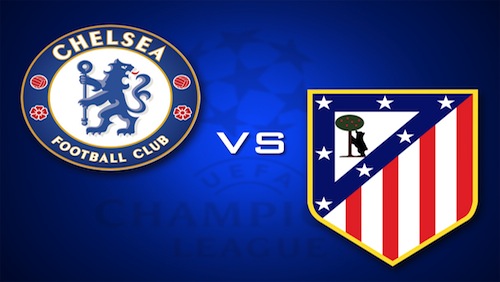 It’s not the fanciest of match-ups (raise your hand if you wanted a Barcelona – PSG semis!) but it’s still compelling enough without pointing out its obvious implications on who goes to Portugal and who goes home.

The first of the two semifinal matches of the Champions League kicks off with Chelsea traveling to Vicente Calderon to take on Atletico Madrid. On paper, it’s not as fancy a match-up as it would’ve been if Barca and PSG handled their business in the quarterfinals. Both teams were in prime position to advance, but surrendered late goals to overturn what would’ve been a dream match for the ages.

So instead we have Atletico Madrid and Chelsea, two teams that even the nicest of pundits believe have overachieved this season. Chelsea might be a glamorous public team, but it’s far from the best in England, let alone the entire expanse of the European continent. But give credit where its due to this team. It’s been treated as a paperweight contender far too often in recent years, and yet when the stakes are highest, Chelsea just finds a way to win. The team is unapologetic about its fortunes, and it’ll probably shove the Champions League trophy it won just two years ago up your ass just to prove its point.

Meanwhile, Atletico Madrid has always been a pretty good team in La Liga, just not good enough to challenge he chokehold Barcelona and Real Madrid have had on the rest of the league in recent years. It also lost star striker Radamel Falcao to Monaco this season, making its improbable run to the Champions League semis that much more, well, improbable.

But Atleti seems to thrive on such circumstances. Just when everybody thought they’d take a step back, the boys from the Calderon, led by stud striker Diego Costa, 22-year old talisman Koke, and ironically, on-loan from Chelsea goalkeeper Thibaut Courtois,have taken siege of Spain’s top-flight league. As it stands now, Atletico sits at the top of La Liga with four games left and four points clear of Barca. Who saw that coming, right?

Atletico Madrid has proved without a shadow of a doubt that it’s the real deal and it’s semi-finals clash with Chelsea figures to test how far the former has come in becoming a European power. It’s not going to be an easy task against a battle-tested Chelsea squad that has seen its share of big matches in recent years.

Much of the pre-match talk has been about Fernando Torres’ return to his old stomping grounds and the status of on-loan from Chelsea goalkeeper Thibaut Courtois. Reports have suggested that Chelsea had a clause in the loan deal meaning the Belgian would not be allowed to face his parent club unless Atletico paid a fee of £5 million. But Atletico found itself an ally in UEFA, which announced after the draw that such a clause was invalid, paving the way for Courtois to be able to man the goal for the Spanish side.

All these talks will inevitably be put to rest as soon as the match starts. Who cares if it’s not Barcelona versus PSG?

Atletico Madrid versus Chelsea is mighty fine with us.