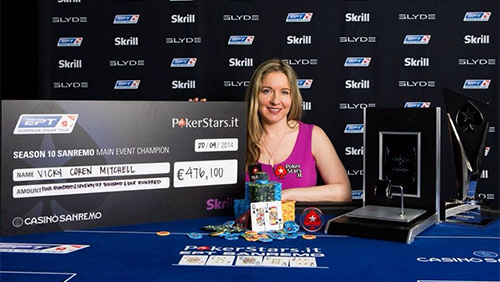 The waiting is over.

The poker world finally has a two-time EPT Main Event champion and it’s none other than Victoria Coren Mitchell.

The name may have changed, but some things haven’t. Victoria Coren Mitchell first achieved poker glory back in Season Three, when she captured the EPT London crown in her own backyard at The Vic, and now she can add a EPT San Remo Main Event to her trophy cabinet after defeating Giacomo Fundaro in heads-up action.

Her Twitter account has never been quieter as Coren Mitchell set about her task of turning the shortest stack at the table into the only one left.

It was a long, long wait.

98 EPT Main Events to be exact.

The first-player to be eliminated from the final table was Emmanuel Pariset, in what can only be described as a hand he will want to forget in a hurry.

Jordan Westmorland opened the action to 100,000, Pariset flatted in the cutoff before Andrea Benelli squeezed to 325,000 from the big blind. Westmorland folded and Pariset made the call.

The dealer pushed the [6s] [5d] [2d] onto the flop and whilst everyone was waiting for Benelli to act, Pariset moved all-in out of turn. Benelli checked so the action stood and then Benelli finally made the call and showed pocket kings, whereas Pariset was left needing a miracle that never came holding king-queen.

Benelli was soon at it again and this time it was Andrija Martic who felt his wrath. The Italian calling a Martic shove holding [Ks] [Js], and despite being behind to Martic’s [As] [Jc], three spades on the flop, turn and river were enough to send Martic packing.

Bruno Stefanelli had to settle for sixth place after being eliminated by Jordan Westmorland. It was all-in pre flop with Stefanelli holding [As] [Jd], Westmorland holding pocket jacks and five community cards later the Italian was out.

Andreas Goeller followed him and once again it was Westmorland in the thick of the action. Benelli opened for 120,000 from under the gun, Westmorland called on the button and Goeller made it three to the flop when he called from the big blind.

The flop was [Jh] [5h] [3s] and Goeller made a huge over-shove. Benelli folded and after some time in the tank Westmorland made the call. It was [Ah] [3h] for bottom pair and the flush draw for Westmorland, and Goeller was ahead with [Td] [5d] for middle pin.

The dealer burned and turned fourth street and it was a [3c], to hand Westmorland trips, and after the river bricked Goeller was out.

Four became three after the elimination of Andrea Benelli.

Fundaro opened up from the small blind, Benelli moved all-in from the big blind and Fundaro made the call. It was [Qd] [Tc] for Fundaro, [Kh] [Ts] for Benelli, but a queen on the flop dashed any hopes of a Benelli title.

The three-way action was quite riveting with all three players experiencing some time in the chip lead before Coren Mitchell dropped the hammer.

Westmorland raised the button and then called a Coren Mitchell three-bet from the blinds. The flop rained down [Td] [Th] [2s] and the pair got it in with Coren Mitchell dominating Westmorland with [Ad] [Tc] v [Qc] [Ts].

That hand left Westmorland very short stacked and he put the rest in with [Qh] [6h] and Coren Mitchell was on hand to end his tournament hopes with a call holding [Ad] [3s] and the best hand held.

The elimination of Westmorland was crucial as it handed Coren Mitchell a 3:1 chip lead over the former World Poker Tour (WPT) champion Giacomo Fundaro.

The turn card was the [Ts], Fundaro checked, Coren Mitchell bet a cool million, Fundaro moved all-in and the former EPT London winner made the call. Fundaro still had outs, but the [4s] wasn’t one of them, and Coren Mitchell rose to be congratulated as the player who would always be remembered for re-writing the EPT record books.