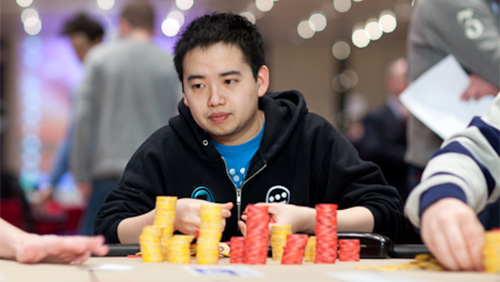 Andrew Teng becomes a two-time Grosvenor United Kingdom Poker Tour (GUKPT) champion after defeating Jonny Gray in heads-up action to take the first prize of £25,000 and a seat in the 2014 Grand Final.

He carries the name ‘Tufat23’ and his wallet is certainly feeling a little ‘too-fat’ this morning, after Andrew Teng banked £25,000 and a seat in the 2014 GUKPT Grand Final, with victory at the the Scottish capital this weekend.

The victory is Teng’s third of his career, and his second GUKPT title, after he tamed the field at GUKPT Thanet in 2008 for a $116,421 score (his best score to date).

It was a cracking little field.

The Poker Mob members: Joe Beevers, Barny Boatman and Ross Boatman were making their debut as sponsored pros, and the World Series of Poker (WSOP) & World Poker Tour (WPT) winner, Dominik Nitsche, lives in Edinburgh so it would be rude not to put in an appearance.

The German made it through to the final where he would face off against his housemate Teng, online cracker Ross ‘RLOG’ Loggie and the Grosvenor sponsored pro Jeff Kimber.

Nitsche actually started the day as the chip leader, but soon lost ground before becoming the first player eliminated from the official final table, after he ran [Ah] [Kh] into the pocket aces of Kimber.

David Gillies (8th) and Yingtao He (7th) exited stage left before Ross Loggie shoved his 10BB stack in from the small blind, holding [Kh] [9h], and Jonny Gray woke up with aces in the big blind.

Kevin Wood was dispatched to the stands in fifth, and then heartbreak for the Grosvenor sponsored pro Jeff Kimber, after his pocket queens were cracked by the pocket nines of Gray, before Teng signified the death knell when Kimber moved his remains into the middle holding [Ad] [7d] and Teng snapped him off with [As] [Ts].

Scott Brown faltered in third; leaving Gray and Teng to carve out a deal that saw Teng take £25k and Gray take £22k.

The final hand of the heads-up contest saw Gray move all-in with ace-nine and Teng wake up with the cowboys to secure the win and Grand Final seat.

The victory moves Teng over $700,000 in lifetime live tournament earnings.