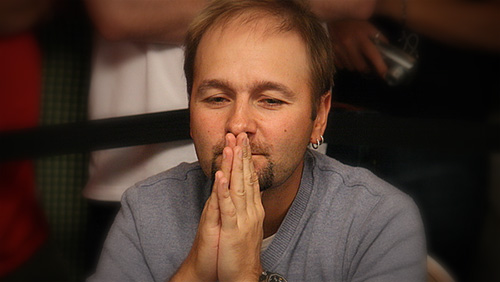 Lee Davy delves a little deeper into Daniel Negreanu’s dream to help push poker into the Olympic spotlight and questions whether or not he is the right man for the job?

Can poker ever become an Olympic sport?

That’s the question that I was left to ponder after Daniel Negreanu put fingers to a keyboard and created his Olympic games blueprint on FullContactPoker over a fortnight ago.

Is it nothing but a pipe dream, or will we one day see the likes of Daniel Negreanu squaring off against Phil Hellmuth for an Olympic gold medal?

I think it’s the latter, but I am not so sure that Daniel Negreanu will be the reason why.

Would Poker Be Accepted as an Olympic Sport?

I know that some of you don’t really see the difference between beach volleyball and balloon volleyball but the International Olympic Committee (IOC) see things a little bit differently.

In order for a sport to be considered for inclusion in the Olympic games, it must have its very own International Federation (IF), and have held its very own World Championships.

If your sport can successfully jump through those hoops then it could be included as a demonstration sport, and then the sports IF can make an application to the IOC to be considered as an Olympic sport.

This entire application process takes a minimum of six years, which is a shame, because poker is a recognized sport in Brazil, which is where the 2016 Olympic games will be held.

This is where poker’s fragmented dog-eat-dog set up will prove to be its Olympic downfall. As far as I am aware we don’t have a collected IF, and I am sure the three major live tournament organizers would have a nice argument over who owns the rights to host the official World Championship competition.

Do We Have the Right Image?

The Olympics has had its fair shame of doping scandals, bribery, boycotts and even acts of terrorism; and yet you can’t help but feel that from an image point of view poker has a lot of work to do to if it wishes to become an Olympic sport.

Dave Brannan, CEO of Living it Loving it and Mindsports International is one man who works feverishly behind the glare of the spotlight to try and push poker, and other mindsports, into the mainstream, and he believes poker came mighty close to being showcased as a ‘demonstration sport’ at the 2016 Brazil Olympics.

“It was being considered for testing at Rio, but the Full Tilt incident ended any hopes of that happening.” Said Brannan.

This is where poker shoots itself in the foot with a bazooka. We just can’t seem to keep squeaky clean. Imagine if you were on the IOC panel pondering pokers application and you have to consider Black Friday and all the other cheating scandals that seem to invade my computer hard drive at least once a week.

Would you pick up the stamp marked ‘Approved’?

Is Daniel Negreanu the Right Man to Push This Forward?

Under normal circumstances we would be celebrating the fact that poker’s global ambassador has chosen to be the first real face to push forward this idea, but a little deeper thought and you might want him to stand down before he has even gotten started.

Daniel Negreanu is an employee of PokerStars, and as much as we all love them, they are a gambling firm. I don’t think the IOC would want an affiliation with a gambling company.

PokerStars can’t even get a license to operate within the United States of America.

What does that say to the IOC?

So as long as Daniel Negreanu has an affiliation with a gambling company then I don’t think he is our figurehead on this one, and this is something that Dave Brannan also agrees with.

“We do have a wonderful opportunity, but unfortunately poker does seem to shoot itself in the foot because it’s mainly the gambling companies that are driving poker’s growth and not the gaming companies.

“If Daniel was sponsored by the likes of Samsung or EA then he would have more clout. Unfortunately, it’s all about association.”

It’s Not About the Money

We cannot make this about the money.

In Daniel’s blueprint he talked about a buy-in and prize pool and this is not the way to approach this.

I realize that poker is nothing without some green on the table, but this is the Olympic games. If we cannot find poker players willing to play for nothing but the honor of becoming an Olympian then we don’t even deserve to be at the games.

Do we honestly think that Michael Phelps would turn his back on the Olympic games because he is not going to be paid enough money?

It’s like everything in life. If you do something that you love then the money will duly follow as long as you work hard enough. Being an Olympian attracts money. There is no need for this to be about money.

So How is This Going to Happen?

Poker won’t make the journey on it’s own. It’s too dirty, disjointed and the IOC won’t like the look of it. Instead the push has to come from the midst of something much greater and this is where Mindsports International comes into its own.

“I have been working in the background for many years to get poker to a point where it’s commercially viable to brands outside of gambling, and Mindsports International is ultimately where we ended up,” said Brannan, “There are some very well meaning governing bodies out there but poker needs to sit somewhere else first, where it doesn’t get mentioned as just poker. It’s so much easier to sell the idea of poker as part of the Mindsports genre.”

I do think poker players will also have a big say in the future of poker as a more globally attractive proposition, but they will have to part ways with their gambling affiliations and instead join forces with the likes of Mindsports International if they are going to make a more producive impact with the decision makers.

“Daniel is right in his approach to try and get poker recognized as an Olympic sport, but he would have to step away from the industry he knows and walk through a very different door to get what he wants.” Said Brannan. “I would welcome Daniel Negreanu as an ambassador and would love to sit down and talk to him about this project.

But can it really happen?

“I think it will happen, but whether it happens in the next 10-years is another matter.” Said Brannan.