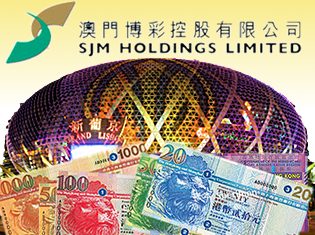 Slots and other electronic gaming revenue slipped 7% to HKD 1.4b despite daily win per machine rising 6.5%. The culprit here is the forced closure last year of two SJM slot lounges to honor Macau’s desire to eliminate gambling joints from residential areas, which pushed SJM’s total number of machines in operation down nearly a fifth to 2,880.

Looking ahead, SJM is stoked at having broken ground earlier this month on its $4b Lisboa Palace integrated resort on Cotai. SJM’s first foray onto Cotai will open in 2017 with a Versailles theme because SJM CEO Ambrose So believes that theme resonates well with mainland consumers. SJM says it intends to remain focused on the Macau market, while “selectively considering opportunities” for expansion elsewhere in Asia. Earlier this month, SJM announced a joint venture with the eGame Group to launch lottery operations in five countries.