Home / Poker / The WPT World Champion is set to Walk Away with at Least $1.35m 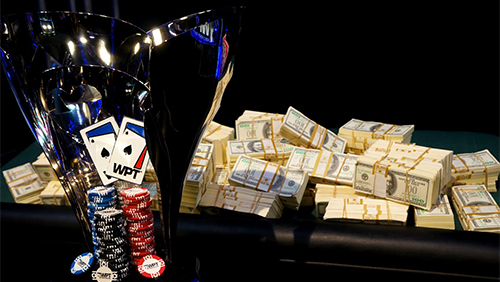 The World Poker Tour (WPT) World Champion is guaranteed to walk away with $1.35m in prize money after the tournament organizers declare a $5m guarantee on the event.

When the World Poker Tour (WPT) unveiled their intention to make changes to the tried and tested format of their marquee event: the WPT World Championships, there were some growls, some scowls, some whoops and some delights.

Poker doesn’t shy away from change and the WPT clearly felt a change was needed to inject more life into a tournament that only attracted 146 entrants when the bad boy Chino Rheem defeated badder boy Erick Lindgren to take the first prize of $1.1m in May of 2013.

The $25,500 price tag was slashed to a more affordable $15,400 and the venue moved East as The Bellagio was cast aside to make way for the Borgata Hotel Casino & Spa in Atlantic City.

So great news for people who play their poker on the East coast and have a beady eye on the fluctuations of their bankroll.

But what about the rest of us folk?

Well the WPT World Championship sponsors, PartyPoker, have just issued a press release stating that the Main Event will now carry the weighty headline of a $5m guarantee, with $1.35m of that reserved for the eventual winner.

How can they be so bold?

In a few words – online satellites.

The reduced buy-in means PartyPoker can create a raft of online satellite competitions guaranteeing $18,000 prize packages, and are so sure of success they are quite literally putting their money where their mouth is.

“It’s big news that the WPT World Championship has moved east to Atlantic City for the first time in its history and that $5,000,000 is guaranteed meaning first place will take home at least $1,350,000. We thought we would find New Jersey’s Next Poker Millionaire on nj.partypoker.com in January but we’ll also find one in April too! The buy –in for this season’s WPT Championship has been lowered to $15,400 making it more accessible for online qualifiers.” Said Team PartyPoker’s Mike Sexton.

There are plenty of ways to win a package ranging from daily freerolls up to the $500 buy-in event aimed at the players with slightly bigger bankrolls. The $18,000 package includes a $15,400 seat, 6-nights hotel accommodation and $1,350 travel and spending money.

One man who will be trying to take advantage of the online satellite qualification is Team PartyPoker member Marvin Rettenmaier: “Winning the WPT World Championship was one of the greatest days of my life and to do it in my first week as a member of Team PartyPoker was just the cherry on top. It is rare to see many online qualifiers for bigger buy-in events so I for one will be aiming to secure a seat as one is guaranteed in the $500 entry satellites on March 9, 23 and April 6. Even better I am going to try and freeroll my way in!”

The main event operates between April 11 − 26 and satellites are already underway at PartyPoker.com