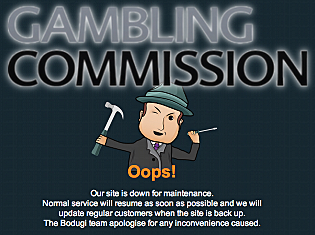 The UK Gambling Commission has suspended the gambling license of real-money social sports betting operator Bodugi Limited. The Commission published a notice on Friday saying the suspension was “a precautionary measure” after customers complained about an inability to withdraw funds from the site, coupled with Bodugi’s “lack of response to the Commission’s request to discuss our concerns.” The Commission has commenced a review of the situation and the suspension will hold until the review was concluded. The Bodugi.com site is presently displaying only a “down for maintenance” message.

Meanwhile, the Commission is warning online gambling operators that failure to submit their new licensing applications on time will result in them missing out on a potential sports betting bonanza this summer. The UK’s new Gambling (Licensing and Advertising) Bill – which requires all UK-facing operators to hold a UK-issued license in order to accept wagers from and advertise their products to UK punters – is scheduled for another going over in the House of Lords on March 4 and royal assent is expected sometime later that month.

Two months after assent is given, the Commission will give operators a month-long window in which to file license applications, with an extra one-week “dead period” tacked on for laggards. Operators currently licensed by European Economic Area jurisdictions and the UK’s ‘white list’ – Alderney, Antigua, the Isle of Man and Gibraltar – who file their applications on time will be granted transitional licenses to allow them to continue operations in the UK while their applications are processed.

The timing of the application window means operators will need to file their paperwork on time if they wish to take UK wagers on this summer’s FIFA World Cup. Remote Gambling Association (RGA) director of policy and projects Sue Rossiter told eGaming Review that the RGA’s membership “cannot tolerate” a situation in which they’re forced to compete against “rogue” operators for World Cup wagers, and she expects “swift and decisive” action by the Commission against said rogues.

It’s not known precisely what action the Commission might take against operators who fail to adhere to their timeline. The UK government has suggested IP-blocking sites not holding a Commission-issued license but internet service providers have said they won’t comply with that directive without a court order.