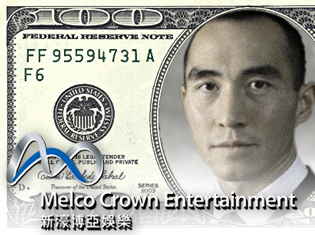 Macau casino operator Melco Crown Entertainment (MCE) closed the book on 2013 in style by announcing its first ever dividend to shareholders after releasing its Q4 and FY report cards. Revenue rose 27% in Q4 to just under $1.4b, while earnings rose 49% to $369m and net income more than doubled to $247.5m. Full year profits rose nearly 53% to $637.5m, leading the company to recommend paying a special dividend of $191.2m (34¢ per share) and instituting regular quarterly dividends worth 30% of annual net profit. MCE is a joint venture of Melco International Development and James Packer’s Crown Resorts Ltd.

Over at Altira Macau, mass market table drop rose 30% and hold percentage was basically flat at 16.3%. This helped offset a $1.3b decline in VIP rolling chip volume but Altira’s overall earnings fell 18% to $43.8m. The Mocha Clubs slots parlor operations saw revenue rise 10% to $38.8m and earnings rise 33% to $10.8m. Net win per machine per day shot up 34%, offsetting a significant year-on-year decline in the number of machines in operation (from 2k to 1.7k) thanks to the local government’s bid to close gaming operations in residential areas.

Looking ahead, MCE plans to open its City of Dreams Manila property this year and the Studio City property in Macau is on target to open mid-2015. Asked by analysts to name a specific month when the Manila property might open, Ho would only say it was “going to be around the middle, in the second half of the year.” Ho said it was more important to get things right than to stick to an arbitrary opening date, because “we’ve seen some of our competitors rushing their openings and that’s never a good thing.”

As for MCE’s Japanese hopes and dreams, CFO Geoffrey Davis told analysts that the company had had “early discussions” with potential local partners but was keeping all options on the table. Davis said MCE would obviously prefer to be the majority partner in any joint venture but “we’re very open minded and we would love to discuss it with the government agencies.”