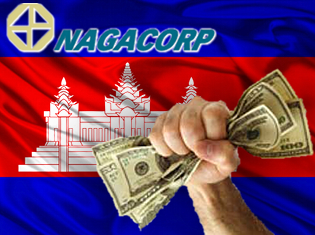 NagaWorld plans to add up to 63 new VIP tables in 2014. To ensure those tables get filled, NagaCorp has set up a new marketing office in Macau to strengthen relationships with local junket operators and will charter flights between Macau and Phnom Penh. Due to a dearth of direct flights between many Chinese cities and Cambodia, plans are also afoot to buy or rent a couple Airbus jets to ensure a steady stream of mass market tourists to NagaWorld. (Insufficient player traffic was recently cited by Entertainment Gaming Asia for the dire performance of its Dreamworld Pailin casino on Cambodia’s border with Thailand.)

NagaCorp said its $369m Naga2 facility is on track to open next door to NagaWorld in 2016. When complete, Naga2 will offer up to 300 gaming tables and 500 EGM, plus 1k hotel rooms and a 4k-seat theater. NagaCorp also said it’s in the process of establishing indirect subsidiaries in Russia to oversee development of its $350m casino in the Primorye region near Vladivostok, Russia. (FYI, the new gaming zone finally has a name: Primorsky Entertainment Resort City, or PERC, for short.) The company figures obtaining all the necessary permits will take one to two years, with the project not expected to open its doors before 2018. When it does open, it will reportedly feature design elements borrowed from Beijing’s ‘birds nest’ Olympic stadium.