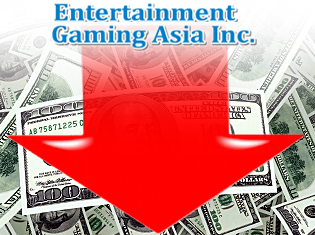 Asian casino/slots operator Entertainment Gaming Asia (EGA) has been forced to write off $2.5m related to its struggling Dreamworld Pailin casino in Cambodia. The facility, which opened on Cambodia’s northwest border with Thailand in May 2012, had struggled with declining revenue throughout 2013. The company ultimately determined there was “an insufficient level of natural player traffic” to make the property profitable. In September, EGA announced it would retool the Pailin operation, leasing eleven of its gaming tables to a third-party operator “in an effort to provide recurring revenue and reduce operating costs.”

In a release earlier this week, EGA noted that the Pailin property’s operating losses had “narrowed” in recent months due to its change in strategy. EGA noted that it is “reliant” on this table rental income to cover its operating costs, but these operations “do not generate positive cash flow” at present and EGA “does not see an avenue to improve profitability under this model.” EGA is pondering “all potential options” to reverse this trend, including seeking additional table leasing deals, subletting the entire property or simply pulling the plug and mourning its failure.

In addition to its casino chip- and plaque-manufacturing division, EGA operates the Dreamworld Poipet slot hall in Cambodia, which opened in May 2013, EGA also supplies slots to NagaCorp’s NagaWorld casino in Cambodia’s capital Phnom Penh. Melco International Development, the Hong Kong-based part of the Melco Crown Entertainment joint venture which operates casinos in Macau and (soon) the Philippines, owns a 38% stake in EGA.

The paucity of Thai gamblers crossing the border to gamble isn’t limited to Dreamworld Pailin or even Cambodia. In December, casinos in Laos’ Savannakhet province reported tourist arrivals from Thailand were off 10% year-on-year, a shortfall blamed on the ongoing political demonstrations in Bangkok. Given that this week saw the Thai government declare a state of emergency, impose curfews and issue a specific warning on traveling near the Thai/Cambodia border, Dreamworld Pailin’s sagging fortunes don’t appear due for a reversal anytime soon.

In more positive news, the Nasdaq-listed EGA announced the dismissal of a civil action brought against the company in 2010 by former shareholders, including Prime Mover Capital Partners LP, Strata Fund LP, Strata Fund QP and Strata Offshore Fund. A New York court ruled against the plaintiffs in September 2012 and this action has been upheld in US District Court for the Southern District of New York after the plaintiffs failed to request a rehearing in the permitted timeframe.