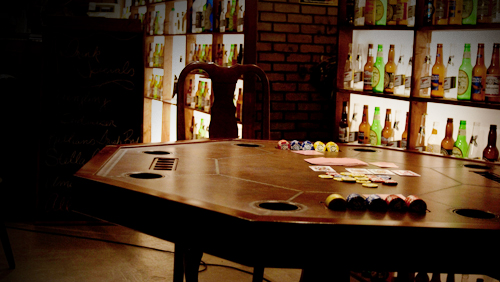 The obvious answer is it’s a game of cards, but we all know the rabbit hole is slightly deeper than that. The wiki version of poker contains a sentence that I would like to make reference to when it comes to describing our beautifully annoying game.

“Thus, while the outcome of any particular hand significantly involves chance, the long-run expectations of the players are determined by their actions chosen on the basis of probability, psychology and game theory.”

Probability and Game theory are subjects that can be written about by much smarter writers than I. Instead, I would like to spend some time talking about psychology – or more accurately chatter, banter, talking, shouting, arguing, waffling or any other form of table talk poker.

What is poker without the table talk?

What is poker with table talk?

Table talk is as important for some players as mathematics is for others. How often have people segregated players into an, ‘either,’ ‘or’, category? You are ‘either’ a mathematical type of player ‘or’ you are an intuitive type of player.

It’s the intuitive type of player that usually uses his, or her, vocal chords as a weapon of choice to extract as much chips as possible, but it’s not a weapon that’s used by everyone.

World Poker Tour (WPT) Champions Club member, and current PocketFives World Number #1, Lukas Berglund, is not someone who uses his mouth too often, and he believes it’s very player dependent.

“If you are talking during a hand against a player who is very experienced at live poker then you are just handing them information on a plate; but if you are playing against someone who doesn’t play that much, and you are confident with the way you can talk at the table, then you will probably be able to gain an advantage.” Said Berglund.

“Table talk is only an advantage if you have very good social skills. It’s a very individualistic thing. I would say that the people it comes very natural to are the people who are very confident speakers in every day life. It can be very useful for taking somebody out of their comfort zone, but once you have gained the information your intended line of enquiry has extracted you really need to know what to do with it. If you can figure this out it can be a real advantage.”

Jacobson is not one of poker’s big talkers. He prefers the stonewall approach and it hasn’t done him any harm whatsoever.

“I use table talk very cautiously because I don’t feel like it’s an area where I personally have that big of an advantage.” Said Jacobson.

One of my favorite players in this regard is the WPT and European Poker Tour (EPT) champion Roberto Romanello. The Welshman will be the first to admit that his game would suffer if he were suddenly struck by a case of laryngitis.

When you watch him play he is like a hawk observing a mouse from a 100ft. never taking his eyes off the prize, always flapping those ears to pick up on the slightest reaction, and then he’s in for the kill. He also chooses his opponent’s very wisely. You won’t see him taking the table talk line in a hand against Martin Jacobson; but if he believes you can be rattled then watch out.

Here is what the two-time World Series of Poker (WSOP) bracelet winner, Praz Bansi, had to say about Romanello’s table talk:

“He’s very clever and he’s a master of it, makes some players play terrible against him, it’s twisted how much he enjoys pushing someone to the edge and getting them to lose there stack to him on tilt.”

So who else has the social skills to gain an edge in the game?

There were two people’s names that came up with increasing regularity when I posed this question to a number of people: Daniel Negreanu and Tony G; two people who have very different ways of using their tongue to give people the once over.

When Negreanu sits down at a poker table the man is a lion. He’s the king of the jungle. He knows it and everyone else knows it, and he uses this fact to his advantage like few others can.

The Global Poker Index (GPI) Player of the Decade uses his wealth of experience and confidence to gain an edge by using table talk. Like Romanello he is one of the very best in the business, and if you watch him, he too chooses his battles wisely.

Tony G is a different kettle of fish.

Tony G is a not even in the same kitchen.

The G-Meister General uses a much more aggressive line on his opponent’s. Whereas Negreanu is trying to extract information, Tony G is just trying to get them to stand up and throw a punch. His strategy is to get them so unbalanced that they hand him their chips in gift-wrapping.

Romanello falls somewhere in between.

The Welshman is always extracting information, but he’s also ready to wade into the blood and guts if need be. Don’t be fooled by this kid’s amiable nature…his tongue can cut you to ribbons.

Focusing on Tony G’s more direct use of table talk – what are the limits? How far can he go before he breaches the rules; do we even have any universal rules about the wagging of one’s tongue, and do players deliberately break them or just have a lack of understanding and knowledge of the game?

“We do have a set of rules,” Said WPT Executive Tour Director, Matt Savage, before handing me a copy of the Poker Tournament Directors Association (TDA) 2013 Rules Version 1.1, and continuing, “Rule breaches are usually a result of a players lack of knowledge and understanding.”

I surveyed the rulebook and was happy to see that the rules for table talk aren’t that stringent. I prefer this because it allows the Tournament Directors (TDs) greater freedom to allow the game to flow; it makes for a more interesting spectacle, and the players like Romanello and Negreanu can flourish.

Savage agreed, “I agree that talking is a major part of the game and I have no problem with it for the most part. I want to make it absolutely clear that table talk is allowed, but disclosing the contents of your hand is not.”

Christian Scalzi, WPT TD, concurred with a little caveat added in for good measure: “I agree. It’s a part of our game and has everything to do with the emotions that expect to be raised to a high level, but we cannot allow them to talk for hours before acting.”

That caveat brings me nicely to one aspect of table talk I would like to see deployed more often. For your pleasure, I refer to TDA Rule #27 Calling For a Clock.

Once a reasonable amount of time passes and a clock is called for, a player will be given up to 50 seconds to make a decision. If action is not taken before time expires, there will be a 10-second countdown. If the player has not acted by the end of the countdown, the hand is dead. At TDs discretion, the time allowed under this rule may be reduced.

I don’t believe players are calling the clock often enough. Mouths are being closed far too tight, and so I asked a few people what they thought of the introduction of an automatic clock for each hand. I was surprised to learn that it had already been trialed to great success.

“Yes, it could help,” Said Scalzi.

“Yes, I think it would be great for the game. There are so many players taking too much time. A clock would speed up the play, we would get more hands in per hour and that means more fun,” said Berglund.

“I wouldn’t mind a shot clock, but I also don’t mind it the way it is,” said Jacobson, “the only time it gets really annoying is when people intentionally stall in and around the bubble.”

“As a player I wouldn’t mind. I usually make my decisions rather fast, but I think from a practical point of view this could be hard to implement. It seems to be the younger generation that is taking so much more time these days. We need to educate them better and get them to see that they should act quicker, because sometimes they slow the game down too much.” Said Kenny Hallaert.

“The game is becoming too slow and my biggest concern is that it is hurting the enjoyment for some. I’ve already tried a clock and will try it again in the very near future. It’s tough logistically, but the feedback from the players was good. I used a 30-second clock with a one-minute extension and the players got it immediately, “ said Savage.

I think the clock is on its way to a tournament near you.

To finish off this little ditty about the art of talking bollocks (something I excel at, as well as writing it from time to time) I asked Christian Scalzi and Matt Savage to talk about some of the most absurd situations they had been asked to officiate after table talk had gone awry.

“One of the funniest situations I came across was when a third player, who wasn’t even in the hand, called the floor to ask me to intervene because the two people in the hand were talking too much. I had to politely inform him that only the two players involved in the hand could ask for that to happen.” Said Scalzi.

“I used to get told all the time that you are allowed to talk about your hand as long as you are “lying” and only “telling the truth” was against the rules. This was a rule used in LA at some point and it took me a while to get rid of it.” Said Savage.

A full set of tournament rules can be found right here. If you are a player I suggest you familiarize yourself with them.