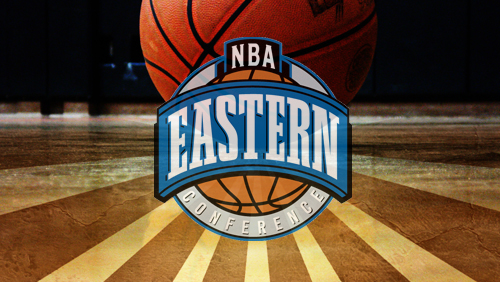 It’s one of the strangest NBA seasons I can remember. For one, there is real suspense about who might win the NBA title. In the East, both Miami and Indiana are legitimate contenders; the West could have as many as six teams with legitimate hopes of making the NBA Finals, depending on how you feel about Houston and Portland. (San Antonio, Oklahoma City, the Clippers, and Golden State would appear to be locks; and don’t forget that ninth-place Memphis made the conference finals last year, has owned the Clippers, and took playoff series from both the Spurs and Thunder in recent memory.)

For two, the disparity between the conferences is deeper than it’s been in perhaps any major sport in my lifetime. Put simply, the West is a fascinating array of talented teams playing different styles of exciting basketball, while the East is two dollops of whipped cream (the Heat and Pacers) on a pile of dogshit. As the West gears up for what could be the most exciting conference bracket in league history, the first two rounds in the East should have all the suspense of a gang initiation beatdown.

Many observers have tied the East’s failures this year to the epidemic of so-called ‘tanking,’ in which teams are supposedly trying to lose this season to best position themselves for the 2014 NBA Draft, widely regarded as the best since 2003 (a year which saw Lebron James, Dwyane Wade, and Carmelo Anthony drafted, among others). But there are fifteen teams in the East, and only two – Boston and Philadelphia – truly appear to be trying to bottom out. It’s not that the East is tanking; it’s that the East just sucks. Put another way, the East is not the bright kid who just doesn’t want to study; he’s a moron. And he’s not getting any smarter.

I mean, beyond Indiana and Miami, is there a single team in the East you’d pay to watch play basketball? Look at the rest of the standings in the conference (records before the games of January 21):

3. Atlanta. Their best player (Al Horford) is hurt and out for the season.

4. Toronto. Their best player (Rudy Gay) is in Sacramento, which is actually worse than being out for the season. (And to the stat nerds who say Gay wasn’t all that good, I get your point. But Gay was talented. It’s also abundantly clear that he was not good enough to carry a team, which he had to do. Because Toronto sucked. I realize they are something like 13-6 since the trade. But, again, they get to play in the Eastern Conference. Someone has to win these games.) And the Knicks wouldn’t trade for their second-best player (Kyle Lowry). The Knicks! Again, this team is .500.

5. Washington. Ownership went all-out before the season, trading a first-round pick for a decent center (Marcin Gortat). They, too, are .500, and Vegas would probably give even odds that they wouldn’t win a single playoff game in a series against either Miami or Indiana. Bear in mind, there could be a first-round playoff series matchup between the Wizards and the Raptors. Two boring teams with terrible nicknames fighting for the right to score lose by 30 a game to Miami in the next round. Good Lord.

6. Chicago. I live in Chicago now, and I’ve seen middle-school teams with more skill on offense. It’s like the basket is 12 feet high on the offensive end of their court. I know they play hard, and you have to give Tom Thibodeau a ton of credit, but no one wants to watch this team. That includes every Bulls fan I know. It’s torture. How’s a Bulls-Hawks playoff series sound? Get ready for seven 83-80 games. It’s like 1995 all over again, but with no intensity and no fistfights. This is getting worse.

7. Brooklyn. A Miami-Brooklyn series would be fun, if only for ESPN commentators to spend three days ahead of the series asking if maybe Paul Pierce and Kevin Garnett had enough to give the Heat one more run before the end of their careers. And then Lebron would average 38-13-9 in a four-game sweep and we could all appreciate the fact that we’re watching one of the ten greatest athletes of all time. But the Nets are awful, and they’re not getting better. You know what they’re going to be in April? Three months older.

9. Detroit. Seriously, who gives a shit? Andre Drummond is going to be good. And maybe by 2020 there will be a team around him.

10. Cleveland. The Cavs show the problem with the tanking strategy. Everyone wants to emulate my beloved Oklahoma City Thunder; well, look at the Thunder’s draft picks over the last five years:

2011: Reggie Jackson (24). The Thunder’s current starting point guard, could start for 80 percent of the teams in the East. (So could I, to be fair; but Jackson is pretty good, and an excellent pick at 24.)

2009: James Harden (3) and Byron Mullens (24 via trade). Harden is an All-Star and Mullens is a rotation player in Charlotte. Again, that’s not saying much, but it’s the 24th pick.

2007: Kevin Durant (2). The Thunder also picked Carl Landry and Glen Davis, only to trade both.

The point is this: you have to get lucky with draft picks. You have to have good drafts, and draft correctly. Cleveland had a boatload of picks – and, with the exception of Kyrie Irving, made wrong picks in the wrong drafts. Insert your own Anthony Bennett joke here.

11. New York. It’s not funny anymore. It’s always fun to root against the mega-market teams, but the Knicks jokes are just getting cruel. It’s like seeing your buddy passed out drunk on the couch, and you draw a penis on his face in magic marker, and you laugh. Maybe somebody’s girlfriend puts lipstick on him, and that’s funny too. Knicks fans at this point are having their head dunked in the toilet and genitals put in their mouth. It’s getting uncomfortable. By the way, they’re two games out of the playoffs.

12. Boston. They’re trying to lose and there’s three teams behind them.

13. Philadelphia. They’re trying to lose and there’s two teams behind them.

14. Orlando. I saw Orlando play last month. They’re young, interesting, and might be a move or two away from being relevant. No shame here.

15. Milwaukee. The one team that swore up and down they wouldn’t tank is on pace to win 15 games in the worst conference in decades.

So, it’s pretty simple – nobody wants to see any of these teams in the playoffs. And none of those teams really, all that badly, even want to make the playoffs. So here’s my modest proposal for the NBA Eastern Conference playoffs.

It’s very simple: everybody goes to the lottery, and Miami and Indiana play a 15-game series. Seriously – Miami-Indiana is the only series anyone wants to watch, and is the only series anybody besides degenerate gamblers is going to watch. We’ll cut the series back a bit to make it fair for Miami and Indiana – they’ll need the rest as they beat the holy shit out of each other for seven weeks. Two games a week in each city, first one to eight wins. Or you would rather watch Hawks-Raptors in front of 3200 fans in Atlanta?

To be fair, Toronto and Washington fans, among others, would probably be upset here. It’s been a long time since they made the playoffs. But, seriously – are you going to get that excited about winning a playoff series over a 36-46 opponent? Take the ping-pong balls, and watch the real games over in the West. And get geared up for some great basketball – as long as most of the Leastern Conference is where they belong, home watching with the rest of us.