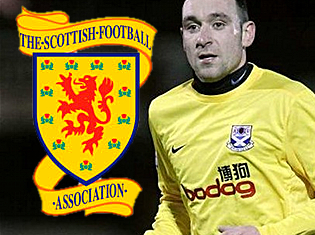 We were hoping that Ayr United striker Michael Moffat would get off with a light penalty after he was found guilty of betting on his own team to win matches. After all, the spirit of match-fixing is effectively thrown out when the player in question actually wants his team to win.

But the Scottish Football Association apparently saw it differently, slapping Moffat with a six-match ban, four games lighter than what Rangers midfielder Ian Black received last year for placing bets on over 160 matches over a seven-year period, including three instances when he bet against his own team.

Moffat was found to have breached the SFA’s rules against gambling, specifically Disciplinary Rule 33, which forbids players from gambling on the sport. According to the SFA, Moffat was found to have made bets between August 3, 2012 and August 10, 2013 and between February 19, 2012 and September 1, 2013. But the SFA also said that it had no evidence to link Moffat to any type of match-fixing, something that we hoped would’ve played a part in the association giving the striker a light sentence, if any at all.

Ayr United chairman Lachian Cameron even went on record saying that the team had no plans to slap any penalties on Moffat because his bets didn’t negatively affect his and the team’s quality of play in any of those matches. If anything, Moffat had even more incentive to play hard knowing that some of his money was tied to his own team winning. But all that is moot at this point because the SFA decided to punish Moffat like he actually cost his own team a win. Oh well, guess the sense of perspective has been lost, or at least muddied, by association with all the match-fixing instances that have plagued the sport for years.

So Moffat’s gonna be in trainers for the next six matches, a punishment that we don’t think is warranted given the details of his case. But ultimately, that’s not our decision; it’s the SFA’s call so its decision is in all likelihood going to be upheld.