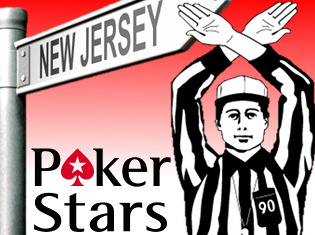 PokerStars will have to wait two years to participate in New Jersey’s online gambling market after state regulators suspended their review of the gaming license application by Stars’ parent outfit the Rational Group. Forbes’ Nathan Vardi broke the news on Wednesday that the New Jersey Division of Gaming Enforcement (DGE) had “determined that the application of Rational Services Limited (PokerStars) casino service industry licensure will be held in a suspended status for a period of two years.”

The DGE justified the suspension by pointing to the “unresolved federal indictment” still hanging over the head of Stars’ founder Isai Scheinberg, who was one of the 11 individuals singled out by the US Department of Justice in the April 15, 2011 ‘Black Friday’ prosecutions of online poker firms. In August 2012, Stars inked a $731m settlement on its Black Friday civil charges, but the criminal charges are still on the books. Despite the setback, the DGE said it “may consider a request for relief to reactivate the application if significantly changed circumstances are demonstrated.”

Stars spokesman Eric Hollreiser issued a statement saying the company was “disappointed” by the suspension, but noted that “the DGE will resume the review of our application if our circumstances change. We will remain in open dialogue with the DGE and will update them on changes in our situation as they occur.” Vardi noted that Scheinberg recently hired former US Attorney General Michael Mukasey to assist his efforts to resolve the outstanding legal issues.

Wednesday’s news has likely prompted executives at Caesars Interactive Entertainment (CIE) and the American Gaming Association (AGA) to pop their champagne corks a little in advance of New Year’s Eve. In March 2013, the AGA launched an unprecedented campaign to queer Stars’ New Jersey aspirations, a move that was widely perceived to have been instigated by the AGA’s biggest financial contributor, Caesars Entertainment. CIE’s New Jersey offering is currently duking it out with the Borgata/PartyPoker combo for New Jersey online dominance – a scenario that would have been far less assured if Stars had been allowed to compete from Day 1 of New Jersey’s online market launch.

It remains to be seen whether Wednesday’s news will prompt Atlantic City’s Resorts Casino Hotel to seek a new online gambling partner. Stars inked an online partnership with Resorts in July after its original deal to purchase the Atlantic Club Casino Hotel came undone in dramatic fashion earlier this spring. The urgency of the matter may depend on the size of the figures in the state’s online revenue reports, the first of which will be published on the DGE’s website on January 14, 2014 at 2pm.