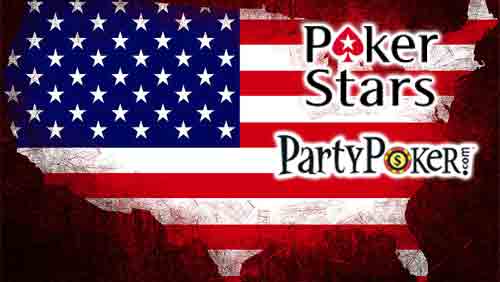 US Gambling wars begin as New Jersey settles into the rhythm of the iGaming world, and it’s the former sweetheart of millions of US online poker fans, PartyPoker, that have the head start in the market place.

Success relies on a number of factors, but who would argue about the importance of being in the right place at the right time, and the old adage, ‘It’s not what you know, it’s who you know.”

These two phrases were a few of the reasons that in the years leading up to 2006, PartyPoker were the undisputed kings of online poker entertainment, with footings of their throne entrenched deep into the fertile soil of the USA.

Back then, PartyPoker were an established online entertainment company, who were smack bang in the middle of a market that exploded when Chris Moneymaker won the World Series of Poker (WSOP).

That put them in the right place and the right time, and with their well-polished televised advertising campaign attracting the fish to the lucrative waters of the PartyPoker software, they also knew everyone they needed to know.

It was a poker players dream, and an online poker company’s fantasy.

Then 2006 rode into town and the Unlawful Internet Gambling Enforcement Act (UIGEA) changed everything. The shareholders of the publicly traded company that was PartyPoker decided to leave the US, and with so went their stronghold on the online poker market.

Seated on the throne was a new king – and they wore the crown of a red spade.

Seven years later and PartyPoker are once again in the right place at the right time. Industry experts from around the globe are looking towards the North American iGaming marketplace to create the next wave of revenues, and it’s PartyPoker that have the throne – not PokerStars.

During a recent interview with Calvin Ayre’s Rebecca Liggerro New Jersey lawyer, and iGaming lobbyist, Bill Pascrell III, said it wasn’t a question of ‘if’ PokerStars would get a license to operate in New Jersey but ‘when’?

With a globally respected brand, and the best software in the business, PartyPoker are going to be doing business in a very different US marketplace than the one they once dominated in the early to mid 2000s.

But they do have a head start, and it’s good to see that they are taking full advantage of it. Their current little tete-a-tete with Caesars/WSOP/888 will do them good as they prepare for the mightier battle that lies ahead. Current industry reports suggesting that the relationship between PartyPoker and the Borgata Hotel Casino & Spa currently holds 50% of the market share in the fledgling New Jersey market.

It’s vital that the New Jersey online gaming industry creates new customers, and doesn’t just rob them from the halls of the brick and mortar casinos, and a new promotion from PartyPoker & The Borgata shows just how this could be done.

The duo is the first to take the promotional marketing campaign by the short and curlies with their plans to create “New Jersey’s Next Poker Millionaire”. A promotional campaign that promises to deliver a one million dollar win in cash and tournament entries on Feb 1st, the eve of Super Bowl XLVIII, an event that takes place in East Rutherford New Jersey.

You only have to experience the current buzz emanating around the PokerStars $27m December Festival promotions to see how effective these ‘hyper sensationalized’ monetary campaigns are at pulling in the numbers.

There are a few ways to win the million. An event that will culminate in a live eight seated final table to be held at the Borgata, which will consist of eight winners of weekly $10k semi final qualifying free roll events.

Players can enter by playing daily free rolls to try and win seats in the $10k semi-final free roll, or use player points to enter the semi final proper. In a bid to get more customers anyone depositing $50, or opening new accounts within 7 days prior to the semi final, will also win fee seats into the semi final.

The million-dollar package comprises of a WPT Alpha8 Super High Roller package ($100k), WPT Championship seat (15K), 52 entries to the online Sunday $50k ($10,400), $8k in live tournament entries to be held in the Borgata Casino & Spa and the rest in cash.

One of the reasons PartyPoker was so successful in the pre-UIGEA market was their ability to use the vehicle of TV advertising to pull in customers by the bucket load.

This new promotion draws on that highly successful string with the World Poker Tour (WPT) brand still existing as the premier live tournament brand within the United States.

It’s great to see online and brick and mortar businesses coming together to offer the citizens of New Jersey more entertainment, just like it said it would, and the return of PartyPoker can only be a great thing for the poker community as a whole.

PokerStars…it’s time to lace up those gloves.

The man above the game: A GAME ABOVE welcomes Bill Pascrell, III as President – A GAME ABOVE, North America
Press Releases
3 June 2020

MODQs – Why should we forget federal?
Mike ODonnell
5 March 2014