World Poker Tour (WPT) Montreal has raced through it’s first 10-levels of this seven day slugfest and the recent WPT Grand Prix de Paris winner, Mohsin Charania, is amongst the chip leaders with 186,300, as the local player Sebastien Drolet-Poitras leads.

The trip to the freezing cold North is one of the most exciting recent additions to the WPT calendar. Last year, Jonathan Roy walked away with the WPT Champions Trophy, a WWE style Champions belt and $779,710 in prize money after defeating a huge field of 1,173 players. 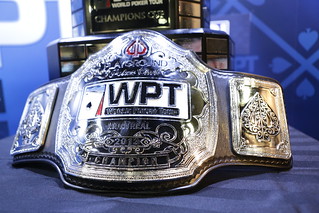 With three starting days, a higher buy-in of $3,850 and the re-entry clause there is no reason why this field cannot be even bigger this year, and the seven day marathon has kicked off with a deluge of stars falling into the Playground Poker Club for Day 1A.

Let’s take a look at some of the finer points of the day.

Marvin Rettenmaier flew in from St. Maartens where he finished in fourth place a few days ago, and he would get unlucky to be ousted in the fifth level of competition. The German got it in behind holding two black kings on [Js] [8s] [3s] in a three-way pot and both of his opponents were holding flushes (one four high and the other queen high), leaving Rettenmaier drawing pretty thin for another spade. It never materialized and the German will no doubt return tomorrow for bullet number two. Chris Moorman, Jason Mann and Peter Jetten were also eliminated in the fifth level.

The sixth level saw the demise of Dan Kelly. There was a raise to 700, Tim McDermott called on the button and Dan Kelly called in the big blind. The flop was [8s] [6h] [4c] Kelly checked, the initial raiser checked, McDermott bet 1,200, Kelly check-raised to 3,200 and the third player folded. McDermott made the call and they shared the [Kd] on the turn. Kelly bet 5,250, McDermott moved all-in for 26,225 and Kelly called with pocket fours, for bottom set, but McDermott was holding pocket eights for a higher set and that was the end of that.

Mohsin Charania also had a good sixth level when he eliminated the ever-dangerous Antonio Esfandiari. The Magician going for gold on a flop of [Ts] [8s] [6d] holding [4s] [2s] for the baby flush draw, and Charania was holding pocket tens for the top set which held.

Daniel ‘Jungleman’ Cates had hung around to try his luck after his Premier League VII exertions, but unfortunately, his luck deserted him in a hand against the November Niner Marc-Etienne McLaughlin. The pair getting it in on [Jd] [8c] [7h] [7c] with Cates holding [Jc] [7d], and McLaughlin holding pocket jacks for the higher full house.

WPT Champions Club member Amir Babakhani took the chip lead after a series of eliminations in the eighth level of play.

His first victim was Bryn Kenney when he flatted Kenney in a three-bet pot holding jack-nine and flopped two pair to douse the flames of Kenney’s pocket aces. Next he eliminated Marc-Andre Ladouceur all-in pre flop when his ace-jack turned and rivered successive aces to beat off the challenge of pocket fives. Mark Radoja, Jason Koon, Faraz Jaka and Tim Reilly also left the building in that level.

World Series of Poker (WSOP) bracelet holder Keven Stammen shipped out in a three way all-in involving Eugene Katchalov and Olivier Carpentier. It was [Ad] [Kh] for Katchalov, [As] [Ks] for Carpentier and pocket jacks for Stammen. The king on the flop creating a split pot of which Stammen had no part; and Charania then eliminated Yann Dion when they got it in aces versus the queens of the Parisian champion; a queen on the river handing Charania the suck out.

Babakhani continued his assault on the biggest names in the tournament when he eliminated Shaun Deeb. The extremely short-stacked Deeb moving all-in for his last 800 chips only for Babakhani to flop the nut flush to send him packing. Martin Jacobson and Pascal LeFrancois joined Deeb on the sidelines, as did Kara Scott when she ran pocket sixes into pocket queens as she also ran short towards the end of the contest.

So that’s a wrap for Day 1A. Day 1B will begin at noon where there will be another 10-levels of play in the pursuit of the WPT Montreal title.