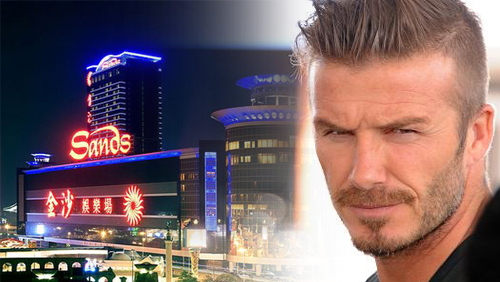 During Manny Pacquiao’s beatdown of Brandon Rios at the Cotai Arena last weekend, the cameras made numerous pans to a dapper-looking David Beckham sitting in the crowd and enjoying the spectacle of Manny’s return to dominance. But while almost everybody thought that ‘ol Becks was there to just take in the fight, he was actually in Macau for another reason.

That reason was officially unveiled yesterday after Las Vegas Sands announced that it had signed an agreement with the recently retired football star to promote its business in Asia. Sands China didn’t dive into the details of the deal, but CEO Edward Tracy did say that the co-branding venture with Beckham will be centered on the latter promoting the company’s new retail and dining ventures.

Since casino advertising is illegal in China, Sands is betting on Beckham’s megawatt star power to drive people into going to Sands’ new entertainment and retail options. In turn, the hope is that these people would also begin to patronize Sands’ casinos. It’s a creative way to drive more gamblers into its rooms without outwardly advertising it.

Having one of the most marketable athletes in the world on board is a pretty good way to do it, especially somebody with the stature of Beckham, who despite retiring from the sport earlier this year, remains one of those rare sports personalities who has been able to transcend his sport and become a brand all his own.

It’s a hell of a deal for both sides, and it’ll be interesting how the two parties will able to make full use of this partnership moving forward.

Beckham MLS legacy will not be a trophyless one
Jamie Hinks
21 November 2011
.