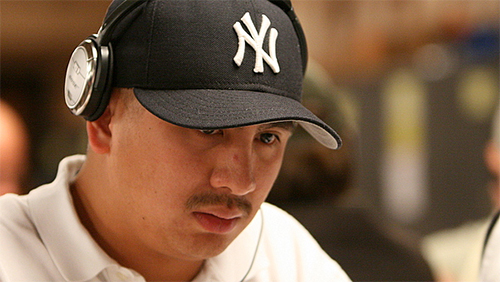 The man many believed would win the 2013 World Series of Poker Main Event has been eliminated.

JC Tran entered the Final Table as the odds-on favorite to take home the title, but a series of losses in the middle part of the day’s event saw Tran virtually lose all of his chips. For the better part of the last few hours, Tran was relegated to the short stack and while he put up a few valiant stands along the way, Tran just didn’t have the chips to make a sustained run at the chip leaders.

The end came at Hand 161 when JC moved all-in for 9.925 million only to see Jay Farber, who had just eliminated Marc-Etienne McLaughlin call from the small blind.

Both players held up their cards with Tran holding a short advantage thanks to his Ah7s compared to Farber’s KsQh. The flop of KdJh9h, however, couldn’t have gone worse for Tran as Farber connected on his Ks. The turn flipped 5d, meaning Tran needed an ace if he was to survive the tournament.

Unfortunately for JC, the 6h that turned up in the river looked nothing like an ace, sending the pre-final table favorite packing while also extending Farber’s growing chip lead over the three other players in the running.

Tran’s fifth place finish might be a disappointed to the man, but at least he still took home $2,106,893 for his efforts.