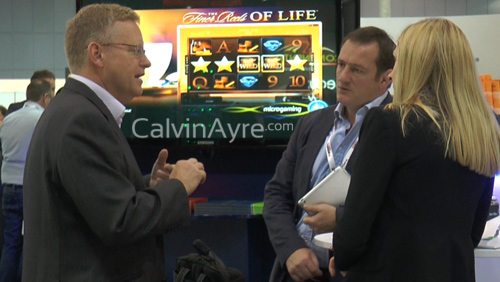 The 12th annual EiG has concluded in Barcelona and Clarion’s hard work truly paid off- the event was a pleasure to attend.  Today at day three and we really enjoyed some great sessions, the revealing of the “Pitch” contest winner and the new “EiG TV” screens that featured a number of interviews with delegates and speakers. (checkout EiG Day 2 and EiG Day 1)

While the third day is always the quietest, the high quality of speakers at today’s sessions did draw a decent following.

Not surprisingly with this crowd Freeman was struggling to get a word in edgewise, but he did manage to reinforce the point that Federal regulation is the way to go- he said too much regulatory tape will increase costs, decrease innovation and make the online gambling industry less efficient- however, the Federal government gives a hoot (his word) about iGaming, so the reality is its going to be state by state.  With that in mind, he AGA’s role will be to help set up basic principals for the states to adapt and follow.

As a side note, we appreciated seeing the AGA’s President attending and actively participating in events like EiG, an indicator that the AGA is making an effort to build relationships with some of the online gambling industry’s biggest players.

The Honorable Jon C. Porter was also on the panel and said that the electronic industry is a game changer- the e-industry is taking over the nature of the business and there is now a shift in power to these businesses from the bricks and mortar.  B&M are now becoming customers of the electronic industry and it’s a major change- we must allow the regulators to do their job and to give them the information they need in order for the proper regulations to fall into place, he said.

Point of Consumption (POC) tax in the UK, or “doomsday” as some call it, was another hot topic, in particular for the regulators and operators based in jurisdictions that are currently (but not for long) on the UK’s “whitelist”. Gibraltar Gambling Commissioner Phill Brear believes that we’ll have to wait until 2015 to see how the UK’s POC tax will truly impact jurisdictions such as Gibraltar, but the critical mass of 2000 skilled employees in Gib, the VAT advantage and the corporation tax advantages will not go away.

Nevertheless, Brear believes that the POC tax is ridiculous and that it will actually allow for the gray markets to thrive, a situation that has proven itself true in other jurisdictions where the rules, tax and regulation are too stringent.

Jez San, Founder of PKR, a UK based online poker company, looked for the silver lining and said there may be benefits for companies to “move back onshore” as bandwidth and hosting costs are relatively low and less complicated to maintain in the UK.

On a brighter note, Totelfootball.com, a pool betting football product based on fantasy points scoring, was the winner of EiG’s “Pitch” contest. The honor was announced at EiG’s closing lunch and accepted by our friend Keith McDonnell who is a Board Member and Shareholder in the company.  Congratulations to McDonnell and team Totelfootball and that’s one great way to end EiG 2013.