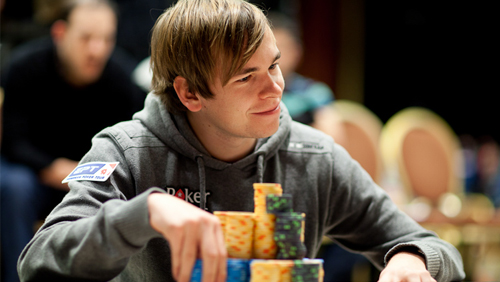 The Season 10 stop at European Poker Tour (EPT) London is well underway after Martin Finger took the top prize in the £50,000 Super High Roller (SHR) on a final table dominated by the German superstars.

Martin Finger has taken the top prize of £821,000 after outlasting a field comprising of 57-entries worth £50,000 a piece, in the Grand Connaught Rooms in London’s Covent Garden, taking his total live tournament earnings over $3.7m, in a career that has barely even started.

SHR events always make great poker news and this event was no different. Finger leading a stacked final table when proceedings began at the climax of the three-day event.

It only took four hands for the heartthrob to leave the table. Patrik Antonius started the day as the shortest stack in the room, and as so often happens, he was also the first to leave.

The online high stakes cash game crusher was placed in a perilous spot after just two hands. The Fin opening the hijack with [Kc] [Qh] and then firing three barrels (worth 75% of his stack) on [Ac] [Qs] [8d] [3h] [5d], only for Christoph Vogelsang to soak every one of them in the big blind holding [Ah] [Th].

Then the death knell rang in awful circumstances as he put his last piece of the pie on the table holding [As] [5s], and despite staring at a 90% chop potential versus the [Ad] [5c] of Timothy Adams, had to endure the cruel run down that saw the deck produce four sparkling diamonds to send the man with the best jawbone in poker out of the contest.

November Niner’s are notoriously hot in the ‘gap’ and David Benefield is the hottest of the lot. The Raptor following up his fifth place finish at the €50k EPT Barcelona SHR event with a seventh place finish in this one.

When the end came it was a cooler for the American. Tobias Reinkemeier opening with ace-king, Vogelsang three-betting with ace-queen, before Benefield moved all-in with pocket jacks. Reinkemeier made the call, Vogelsang stepped aside and an ace on the flop sent Benefield to the cash desk to pick up his £139,600 in prize money.

That performance means Benefield is the early leader in the EPT Player of the Year race.

The World Series of Poker (WSOP) bracelet holder, Timothy Adams, continues to his progression from the bourgeois to the high class, with a sixth place finish courtesy of a bad beat against Bill Perkins.

Adams took fourth in the EPT9 €100k SHR in Monte Carlo earlier this year, and he was eliminated after getting it in good against Perkins: 77 v 66. A six rearing its ugly head on the river to send the Canadian packing for the price of £175,200.

Perkins had a glimmer of hope when an ace showed up on the flop, but it was sitting next to a third queen, and just like that the Germans had well and truly taken over this tournament.

When the three way action began it was Christoph Vogelsang in third place with 2.8m in chips (Reinkemeier 3.5m & Finger 8m), and the live tournament fledgling would flap his final wing not long after.

In what turned out to be his first-ever live tournament cash, the high stakes cash game player moved all-in from the small blind holding [Qh] [6h] and was soon being squashed by Finger and his [Ad] [Ks]. The deck offered no salvation and Vogelsang had to settle for £383,200.

Tobias Reinkemeier is one of the most experienced SHR players in the world, but a 2.5/1 chip deficit is always tough when you are heads-up, as proved to be the case in this one.

Reinkemeier did well to pull some chips back before the inevitable all-in and call. It was pocket eights for Reinkemeier, pocket jacks for Finger and the knaves stayed strong to hand the young German star his third major title of his short career.